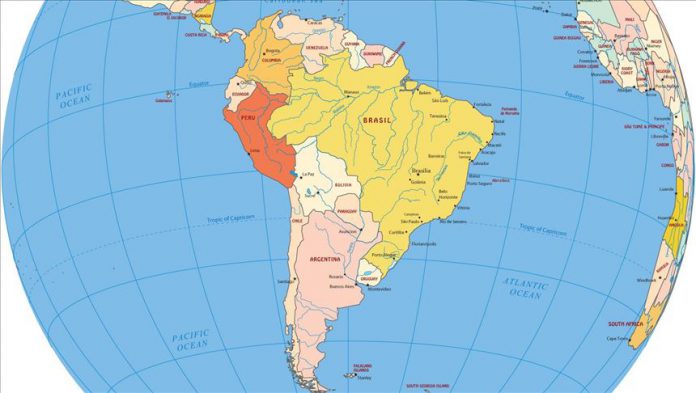 With just a few days left to welcome new year, here’s a look at the key events that made headlines in South American countries rocked by political and social crisis in 2019.

The year began with the inauguration of Jair Bolsonaro as Brazil’s president, however, the heated twelve-month session ends up with the ouster of Bolivian leader Evo Morales and street protests in Chile.

– The far-right leader Jair Bolsonaro, who has a military background, assumes presidential office in Brazil after making himself the most popular candidate in 2018 election polls with his harsh discourse on fighting corruption and crimes.

– Venezuela’s President Nicolas Maduro sworn in for his second term.

– Terrorist drives car full of explosives into a crowd in Colombia’s capital Bogota, before a graduation ceremony of a police academy, killing 21 policemen in one of deadliest terrorist attacks in recent years.

While the U.S. and many European and Latin American countries recognize Guaido as legitimate leader of oil-reach country, Russia, Turkey, China, Iran, Bolivia and Mexico back the elected Maduro government.

– U.S. President Donald Trump says in an interview that military intervention in Venezuela is “an option” after Washington recognized opposition leader Juan Guaido as the interim president of the country in January.

– Ten members of the EU recognize Juan Guaido as the interim president of Venezuela.

– Venezuelan President Nicolas Maduro says that a coup d’état sought by Washington failed, calling for “dialogue, understanding and respect” to resolve the crisis.

-Venezuelan President Nicolas Maduro says one of his country’s electric facilities was subjected to high-tech cyberattacks.

– A group of soldiers led by the Popular Will party leader Juan Guaido tried to stage a coup. Guaido and pro-Guaido soldiers urged the public to take to the streets to overthrow Nicolas Maduro government. The attempt turned unsuccessful.

– At least 57 inmates are dead in Brazil after the Altamira prison riot that erupted as a result of a confrontation between rival criminal factions.

– Guatemala votes for Alejandro Giammattei of the Vamos party as the country’s next president.

– Revolutionary Armed Forces of Colombia commanders say they are returning to war despite 2016 peace deal.

– Venezuela deploys more than 3,000 troops to its Colombian border after the South American nation declares an orange alert, due to ”threat of military aggression” from the neighboring country.

– Peruvian Vice President Mercedes Araoz resigns, putting an end to rumors that she had initially accepted the interim presidency.

– Ecuador arrests at least 350 people amid protests over the government’s decision to scrap decades-old fuel subsidies as part of a reform package.

– Ecuador’s president temporarily moves government operations from the capital Quito to the western port city of Guayaquil amid ongoing protests enflamed by the elimination of fuel subsidies.

– A state of emergency is declared in Chile’s capital Santiago after demonstrations against a rise in metro fares turns into acts of violence that killed at least 23.

– At least 26 people are killed in protests, according to Evo Morales 30, and violence over presidential elections in Bolivia.

– Bolivia’s president declares himself the winner of presidential elections after the first round, saying a 10% lead needed for victory has been achieved.

– Bolivia’s interim government has announced that general elections will be held in March 2020.

– Chile’s Senate has passed a constitutional accusation against the country’s former interior minister over his management of the recent anti-government protests.

– Bolivia’s former leader Evo Morales arrives in Argentina where he was granted asylum.

– Bolivia joins Lima group, which a bloc of 12 Latin American nations working to find a solution to the Venezuela crisis.

– Venezuela’s President Nicolas Maduro urges the country and political parties to get ready for possible parliamentary elections in 2020.

– Chile’s President Sebastian announces that the country will hold a plebiscite for constitutional reform on April 26.

Read more: What happened in South America in 2019: key events