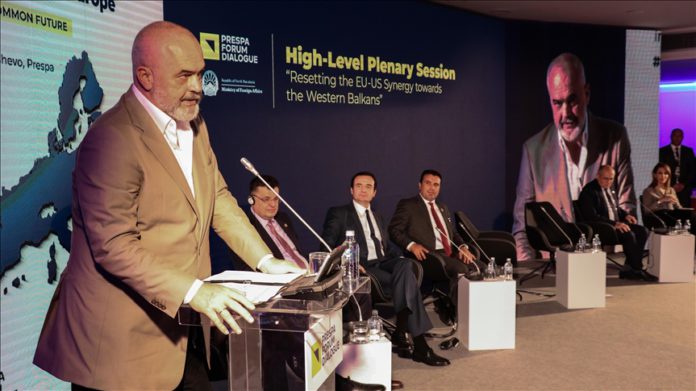 Rama criticized the EU, saying bloc members are more depressed and angry than those in the Western Balkans.

“We don’t need to say to people from Europe anymore: ‘Listen, if you don’t take us, someone else will, a third actor will come to us,” said Rama.

He also made analogies with expressions insulting the EU.

“No! Forget it! I don’t want to express myself ‘we are angry, depressed’ anymore. No, we are not angry, we are not depressed, they, those in the European Union, are more depressed, angrier than we are. So let’s not talk about anger and depression, ” he said.

Brnabic said the group has to overcome feelings of anger and depression in connection with statements by her Albanian counterpart.

“Right now you’re depressed, angry, and then you expect nothing and you’re free. I think that’s how we all feel. It’s a great feeling and we wouldn’t have had it without the EU. Thank you very much for that,” said Brnabic.

Kurti said his country was disappointed because the EU did not start negotiations with North Macedonia and Albania, and reiterated that the EU is the only alternative.

“Kosovo is the only country whose citizens are not granted visa liberalization. However, we must show strength and patience. We must not make hasty decisions that do not serve the interests of our countries, our citizens, or our region,” he said. “Yes, the EU is slow. Yes, they lack unity, but still, the EU is ours. It’s our best hope, and I have to be honest, it’s the only alternative we have. It’s not that we don’t have any other choice because we naturally belong there.”

Zaev said the Western Balkans are strong and stable when transatlantic ties are strong.

He said the EU can set priorities, criteria, or membership dates that it cannot determine the future of Europe with its geographical location, culture and European identity.