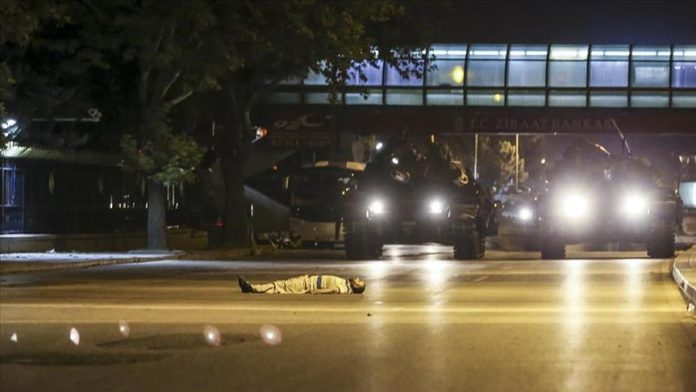 Citizens of the region hailed the Turkish heroism in defeating those who attempted to stage a coup in 2016.

The Yunus Emre Institute organized a youth chess tournament for young people under 18 with and without disabilities.

The Turkish Embassy in the capital Belgrade organized a conference with Serbian academics at the Serbian National Policy Center.

“Serbia is a leader among countries that absolutely understands and supports us in the fight against FETO,” said Turkish Ambassador Hami Aksoy at a conference, referring to the Fetullah Terrorist Organization, which orchestrated the July 15, 2016 coup attempt in Turkey.

Meanwhile, the Turkish Cooperation and Coordination Agency (TIKA) provided wheelchair assistance to the athletes by renovating the office of the Serbian Wheelchair Basketball Federation (SKKS).

Also, in Belgrade, the two major bridges in the city center, Branko’s Bridge and Ada Bridge, were lit tonight in the colors of the Turkish flag as a sign of solidarity and support for Turkey.

A photo exhibition featuring photographs from Turkey’s top news provider Anadolu Agency was opened in the city of Novi Pazar.

In Bosnia and Herzegovina, an online conference was held by the Turkish Embassy in Sarajevo and the Yunus Emre Institute on the occasion of the July 15 Democracy and National Unity Day.

Sefik Dzaferovic, the Bosniak member of the Presidency Council of Bosnia and Herzegovina, attended the conference with a video message reminding that the Turkish people defended Turkey’s peace and stability with the courage they showed five years ago.

“The courage and determination of the Turkish people on the night of July 15 is the matchless struggle of the bare-handed people for freedom and democracy. It will be remembered as an example,” said Dzaferovic.

A reception was held in Podgorica, the capital of Montenegro, by Turkey’s Ambassador to Podgorica, Songül Ozan.

In the city of Prizren in the southwest of Kosovo, the “Pedal for Democracy” event was held in cooperation with the Turkish Cooperation and Coordination Agency.

After the cycling tour, 251 night lanterns were released to the sky in memory of the martyrs of July 15.

More than a hundred cyclists completed the two-hour tour of Prizren.

FETO and its US-based leader Fetullah Gulen orchestrated the defeated coup of July 15, 2016 in which 251 people were killed and 2,734 wounded.