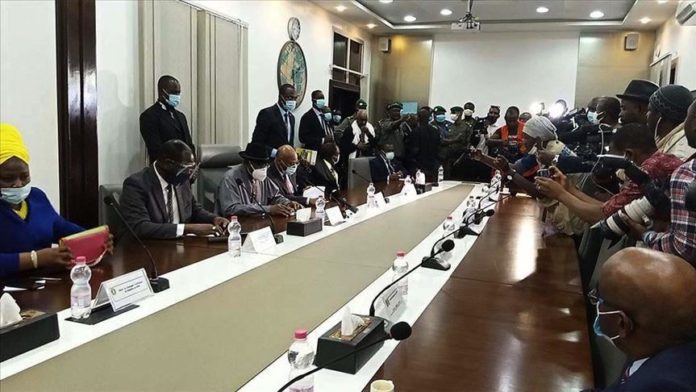 Leaders from West African states have paid a visit to Mali following a military coup in the country.

A delegation from the Economic Community of West African States (ECOWAS), headed by Goodluck Ebele Jonathan, former president of Nigeria, was received at the airport by junta leaders of the National Committee for the Salvation of the People (CNSP).

The delegation met at a hotel in the capital city of Bamako with officials from the UN Multidimensional Integrated Stabilization Mission in Mali (MINUSMA).

MINUSMA was established in 2013 by UN Security Council Resolution 2100 to stabilize the country after the 2012 Tuareg rebellion. It has more than 12,000 military personnel currently deployed in Mali.

Later, the delegation met with CNSP leader Assimi Goita and his entourage at the Defense Ministry, and then visited Kati military camp, located 15 kilometers (9 miles) northwest of the capital, to meet the country’s ousted President Ibrahim Boubacar Keita.

The delegation is expected to continue their meetings on Sunday.

ECOWAS, which attempted to mediate in the deepening crisis between the opposition and Keita, had sent delegations several times to the region, but the negotiations were inconclusive.

While the opposition platform, Rally of Patriotic Forces, also known as the M5-RPF, insisted on Keita’s resignation, ECOWAS said there was never such an option.

ECOWAS earlier announced that after Keita’s forced resignation, the land and air borders of Mali and 15 member countries were closed, while the economic and commercial relations were suspended.

The UN on Thursday called for the “constitutional and democratic order” to be restored as soon as possible in Mali. It also called for the release of Keita and other detainees and “to protect their physical integrity as well as members of their families.”

Keita had announced his resignation after he and Prime Minister Boubou Cisse were detained at the Kati military camp on Tuesday. Mali had been rocked by protests for several months as demonstrators called for the resignation of the president.