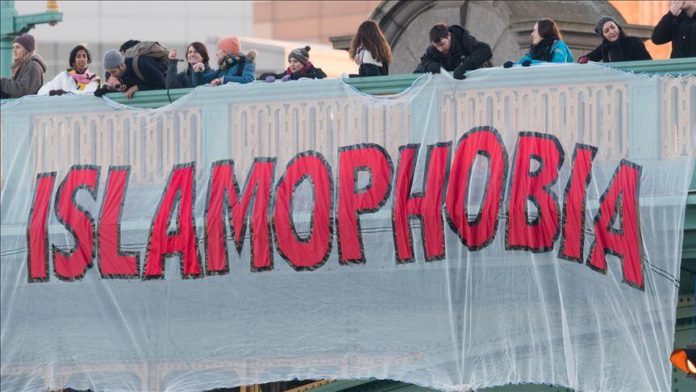 ANKARA – An online webinar Thursday discussed the roots and context of global Islamophobia in light of Islamophobia Awareness Month.

Speaking on “Government counter-terrorism policy and its role in producing Islamophobia,” Narzanin Massoumi, a lecturer at Exeter University, said “Islamophobia is a form of racism and should be taken seriously, just like other forms of racism.”

“Since the beginning of the war on terror, the UK state has used exceptional legislation to target Muslims. This has involved surveillance, detention without charge, extradition, and even citizenship removal,” said Massoumi.

She said the Terrorism Act in the UK gives the state the power to stop a passenger at a UK port without any reasonable suspicion regardless of religion.

“But if you are of Pakistani heritage, you are 150 times more likely to be stopped by that on that measure than if you are white,” she said.

“But it doesn’t just stop at those kinds of harder policing powers. The counterterrorism apparatus has been expanded well beyond its traditional home in the police or security establishment and intelligence agencies into other areas of public life,” she added.

Marwan Muhammad, former director of Collective Against Islamophobia in France (CCIF), criticized France for its latest policies on Islam and Muslims.

“I know of no other country that has this paradox of perceiving itself as the torchbearer for human rights and fundamental freedoms and freedom of expression and all that and at the same time there is this direct dichotomy with the way it treats its minorities,” said Muhammad.

Linda Hyokki, general secretary of the European Forum of Muslim Women, spoke about the difficulties of women wearing a headscarf in the work market in Europe.

“We can actually observe a growing number of European countries implementing laws and policies that directly and indirectly restrict a Muslim woman’s choice of clothing, and subsequently their access to opportunities and rights in the society,” said Hyokki.

According to research by the Pew Institute, said Hyokki, a headscarf ban on teachers in Germany led Muslim women to abandon their careers.

“Muslim women losing not only their jobs or vocations but also their independence and financial security,” she added.

“It is important to highlight at this point that Muslim women are evidently under constant pressure to balance their religious freedom, economic independence and financial stability.”

As well as contemporary problems faced by Muslims in Europe, Ron Geaves, visiting professor at Cardiff University, also discussed the experiences of Muslims in the UK back in the 1880s.