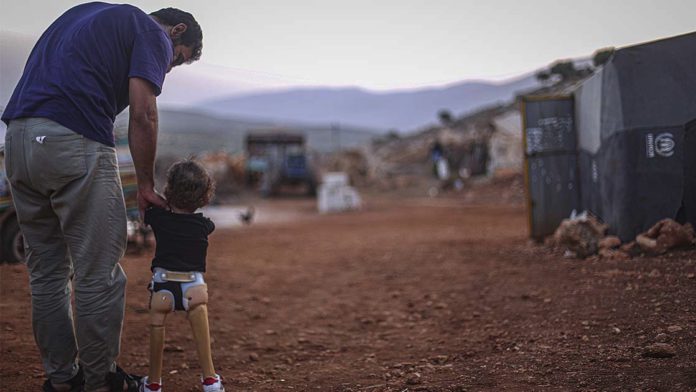 A 15-month-old Syrian baby born with congenital amputation returned his home in Idlib, Syria after receiving a prosthetic treatment in Turkey under instructions of the country’s interior minister.

Muhammed and his parents were brought to Turkey on Sept. 1 and health professionals immediately started the prosthetic rehabilitation process in the capital Ankara, the little child got his prosthetic legs.

Once the seven-week-long adaptation process was concluded, Muhammed and his family returned home in Syria’s northwestern Idlib city.

Halit Misayrif, Muhammed’s father, said the first phase of the treatment was over and an artificial limb would replace the initial prosthetic in the coming period.

His son started to smile once again, Misayrif said, adding that Muhammed would soon be able to walk on his own with the help of Anadolu Agency which narrated Muhammed’s suffering and prompted awareness of Turkish authorities.

Interior Minister Suleyman Soylu instructed relevant authorities to bring Muhammed, who was struggling with his family in one of Idlib’s tents where displaced civilians are living, so Turkey’s disaster agency, AFAD, and provincial governor in southern Hatay province brought him along with his family on Sept. 1.

On Aug. 28, Anadolu Agency shared Muhammed’s story with the world as his family were living in harsh conditions in a region of Idlib where forcibly displaced civilians take refuge.