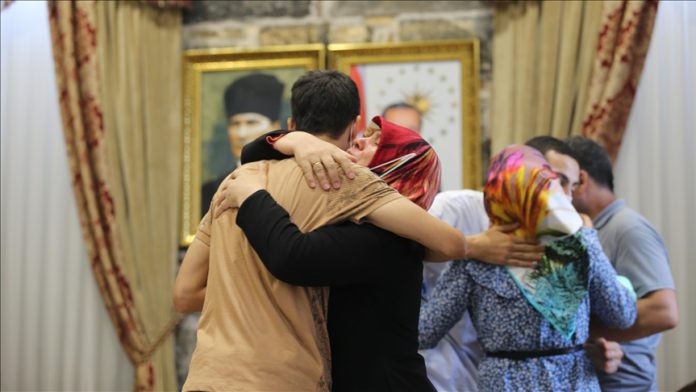 Let the drums play, a feast to be laid as some families are living maybe the happiest day of their lives as they reunited with their children abducted by the YPG/ PKK terror group in southeastern Turkey.

Aysegul Bicer, who was among the mothers that started a sit-in protest in the Diyarbakir province nearly two years ago in front of the office of the Peoples’ Democratic Party (HDP), is joyous as she reunited with her son Mustafa.

“This is a victory of our state, the Republic of Turkey,” Bicer told reporters. She also appreciated the help of press members for “making their voice heard”.

“We all won,” she exclaimed. “This is how mothers achieve victory. By Allah’s will, all our children will be saved from there.”

It is also a day of reunion for Gullu Turan and Hayriye Akyuz as they hugged daughter Alev and brother Ensari, respectively after they surrendered to the security forces in the southeastern Sirnak province on Wednesday.

With the recent additions, the number of protesting families who saved their children from the terrorists rose to 28.

Other mothers more hopeful after reunions

On Aug. 22, 2019, Hacire Akar, a Kurdish mother, staged a protest near the HDP’s office in Diyarbakir, claiming that her 21-year-old son had been taken to the mountains by the PKK after being brainwashed by members of the party. Her son returned home four days later, giving hope to a number of mothers who have suffered the same circumstances.

Another mother, Fevziye Cetinkaya, started a protest on Sept. 3, saying her son was forcibly recruited by the PKK. She was immediately joined by other mothers, including by Aysegul Bicer. Since then, the number of families in front of the building has been growing.

Today, the protesting mothers are full of hope as they witnessed the reunion of Bicer with her son after three years of longing.

Bicer went to the protest site to share the good news before meeting her son after months of struggle.

The sit-in families celebrated Bicer’s reunion with her son by dancing and playing drum and shrill pipe.

Congratulating Bicer over phone, Family and Social Services Minister Derya Yanik said: “The struggle of all mothers is very important, but it is also important that you did not give up despite serious illness, threats and pressure you faced.”

Bicer said in response: “Mothers struggled, but God willing, our state also struggled in the mountains and in the countryside.”

She reiterated: “PKK and its political arm HDP should know well; this protest will continue.”

“Mothers can move mountains and get their children back if they want. I thank my Allah a thousand times I moved mountains and reunited with my child.”

Nihal Ciftci, a protesting mother, told Anadolu Agency that they share the happiness of every family that reunite with their children.

Good news gave them hope, Ciftci said, urging her son to surrender to security forces so that they can reunite.

Another protesting mother Sariye Tokay said: “We are full of joy today. There is a dissolution within the PKK. I hope all the children will return. This is the victory of the parents and the whole Turkey.”