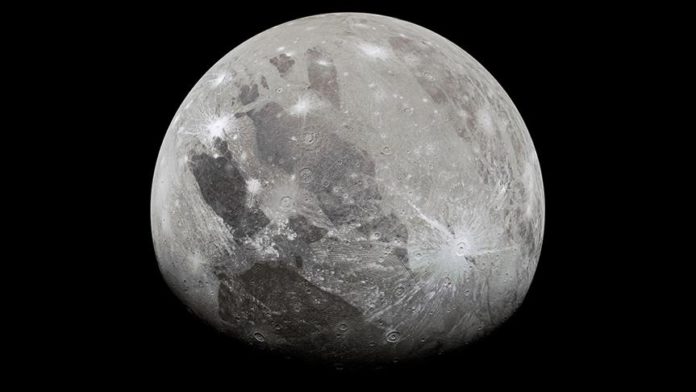 Scientists have discovered for the first time traces of water vapor in the atmosphere of Ganymede, Jupiter’s largest moon.

The US National Aeronautics and Space Administration (NASA) shared the results of observations made by the Hubble Space Telescope in the journal Nature Astronomy and posted them on its website on Monday.

It was noted that as a result of comparing the observations made by scientists in 1998, 2010, and 2018, traces of water vapor were found in the atmosphere of Ganymede.

The water vapor formed when Ganymede was near the equator at noon and the ice surface transitioned from solid to gas, according to NASA.

It also said the oceans on the satellite, which is located millions of kilometers from the sun, are frozen due to the weather conditions as low as minus 300 degrees Fahrenheit.

On the other hand, it was pointed out that no oxygen atoms were found in Ganymede in 2018 data.

Jupiter has a total of 79 moons orbiting it. The largest is Ganymede, the ninth largest object in the solar system.

Larger than Mercury, Ganymede is the only moon in the solar system with its own magnetic field.

NASA’s Juno satellite, launched into space in 2011, has been conducting exploration activities in orbit around the planet since it arrived at Jupiter in July 2016.