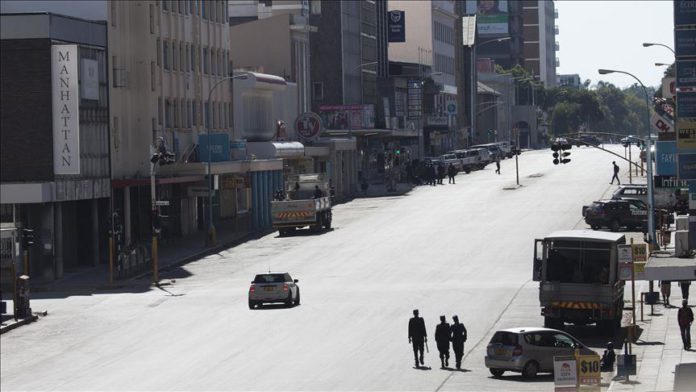 With no access to running water, Jemitius Muruti now has to buy from local water dealers as shortages wrack Zimbabwe putting thousands at risk.

Now, the 54-year-old has a 1,000-liter water tank set up at his house to store the precious liquid which he must now regularly buy from the vendors as the country’s residents face the double threat of the novel coronavirus and severe water shortage.

His home in the Zimbabwean capital Harare last had constant running water a decade ago before inadequate infrastructure and treatment chemicals set in.

Now, water dealers have become Muruti’s saviors during the grueling crisis, though it does not come cheap.

“I have to fork over $50 each time I have to refill my water tank,” Muruti told Anadolu Agency.

With a family of 12 including his wife, children and members of his extended family whom he has sheltered, Muruti said that the demand for water had risen.

Several other families in Muruti’s neighborhood must walk kilometers for the life-saving liquid, queueing for several hours at rapidly drying streams to fill their pots and buckets with dirty water.

Such is the life for many like Mavis Gondobwe, 62, who lives nearby Muruti’s house and says she could rarely afford to keep her water storage tank filled due to the expense.

“Yes, I have a water storage tank at my house, but it’s not always that I have money to keep it filled up with water,” Gondobwe told Anadolu Agency, adding that she solely depended on money sent to her by distant relatives in other countries.

Yet, as many like Gondobwe and Muruti bear the brunt of water shortages, some water vendors like Happymore Chizuzu have benefited.

Water vendors like Chizuzu in the South African country have taken advantage of the crisis, harvesting water from the few available sources and selling it to desperate people across towns and cities.

Water deficits pound Zimbabwe’s towns and cities at a time the country battles to surmount a drought that has hit about 5.5 million people countrywide, according to the UNWorld Food Program.

In fact, Zimbabwe’s water shortages have become so acute that the few people like Muruti who can afford it have mounted huge water storage tanks in their homes to store water sourced from indigenous dealers.

Poor are victims of water deficits

Living in crowded suburbs, Zimbabwe’s low-income households have been the hardest hit by the lack of water, having to queue daily at boreholes drilled by charitable donors in their localities.

Bulawayo, Zimbabwe’s second largest city, is no stranger to the country’s water problems. After a devastating drought last year, water shortages have worsened, forcing locals to trek to unsafe wells as their taps ran dry.

Boreholes save the few

Others in Bulawayo, like in several other Zimbabwean towns and cities, have drilled boreholes to guarantee uninterrupted water supplies.

Yet, those less fortunate, like 38-year-old Silibaziso Dlela who hails from Mpopoma, a high density suburb in Bulawayo, have to make do with rationed tape water that now comes once a week.

If not buying water from water vendors, many like Dlela have come to rely on water brought to their doorstep by council authorities trying to surmount the desperate crisis.

The water shortage has also affected public health. The World Health Organisation (WHO) has said every person must have access to between 50 and 100 liters (13-26.5 gallons) of water per day to meet their most basic needs and prevent disease.

Zimbabwe suffered its largest cholera outbreak on record in 2008 where over 4,000 people died due to the virus in the country.

As such, according to many human rights defenders like Jestina Mukoko, the executive director of the Zimbabwe Peace Project, the water and sanitation crisis places “millions of residents at risk of contracting waterborne diseases.”