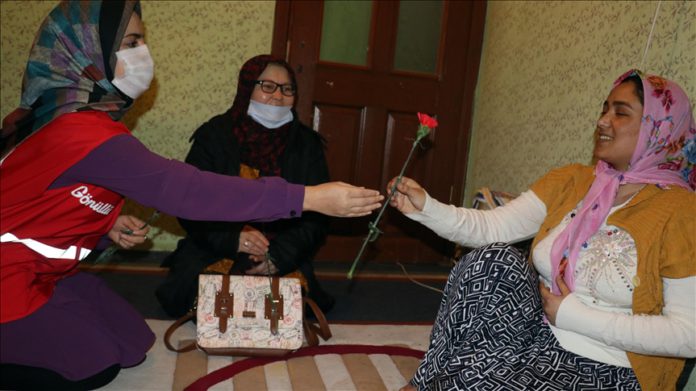 Afghan mothers who escaped civil war, terrorism, poverty and unemployment in their country and reached Turkey by walking in the mountains with their families for days have tearfully expressed their love for Turkey.

Families wanting to offer a better future to their children make their way to Turkey and European countries.

Some of them settle in Turkey’s eastern Agri province after months-long walks in the mountains through Iran.

Families living in peace and security in the houses they rent in various neighborhoods continue their lives with the food and donations they receive from the Turkish Red Crescent and the support provided by the benevolent people.

Nebizade, a mother of three, told Anadolu Agency that her dream was to study, but it was shattered because her family married her off at an early age.

Stressing that violence has been on the increase in Afghanistan in recent years, Nebizade said she lost her daughter to a bomb attack.

“We set out from Afghanistan and reached Turkey three months ago after walking on snow for two months,” she said, recalling the tough journey.

“We are so glad with Turkey. People in Agri are so nice,” she said.

Nebizade said she just heard of International Women’s Day but had never experienced it and expressed her happiness for celebrating it for the first time.

‘Why haven’t we seen any beauty?’

Ahmedi, who was working as a nurse in her country, reached Agri on foot with her children and settled there nine years ago.

Noting that she became very emotional after receiving a flower from the Turkish Red Crescent to mark the day last year, she said they are always grateful to Turkey.

“Sometimes I ask myself: ‘The world is so beautiful, but why haven’t we seen any beauty?’” she said, adding they always saw wars and blood.

Ahmedi said she always advises her children to study.

“People here are so nice that I would never forget them in my life,” she said.

Tatli also said that they help people regardless of their nationality and added that they will continue to help these families.

Fire breaks out at Rohingya refugee camp in Bangladesh