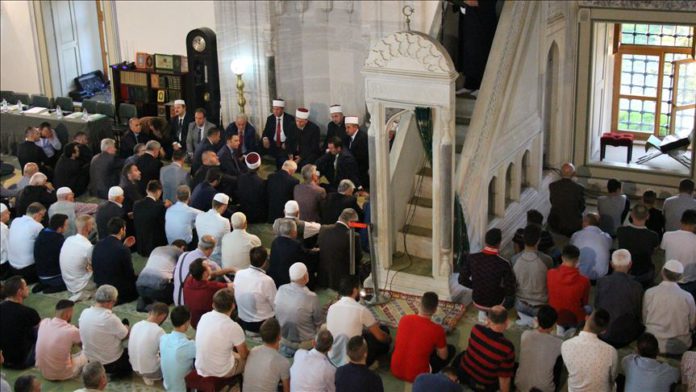 Muslims living in Western Balkan countries are welcoming the Muslim holiday of Eid al-Adha amid protective measures due to the coronavirus pandemic.

While Muslims were saddened to face another holiday amid the COVID-19 measures, special prayers were performed with a limited congregation in most countries due to rising numbers of cases in the region.

Meanwhile, in Serbia, morning prayers were held in houses, while the only mosque in the capital Belgrade did not hold the Eid prayer.

But in the Muslim-majority city of Novi Pazar, believers flocked to mosques for prayer.

In Montenegro, Eid prayers were suspended under an Islamic Union decision, while in Croatia Muslims gathered in the mosque in the capital Zagreb to welcome Eid al-Adha with prayers.

The traditional central ceremony in North Macedonia was not held this year due to the COVID-19 outbreak.

The historical Mustafa Pasha Mosque in the capital Skopje was filled with believers.

Due to a large number of gatherings, citizens had to hold prayers in the courtyard of the mosque.

Albania decided against traditional mass prayers once held in city squares, and instead held them only in mosques.

In Kosovo, the Eid prayer was not held in the mosques. However, a group of people came to the Sinan Pasha Mosque in the city of Prizren for prayers but police did not allow them to enter mosques.

Coronavirus cases in Ghana near 22,000