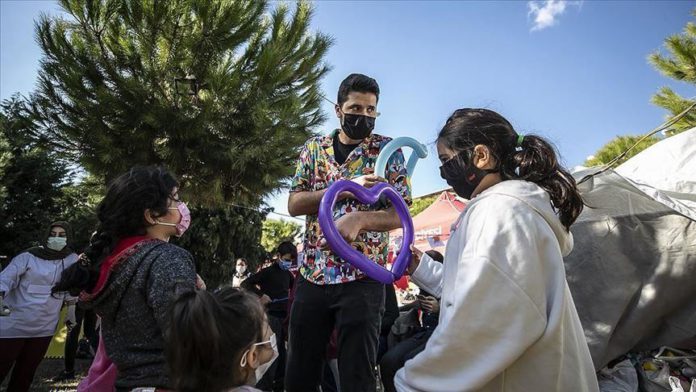 A group of volunteers joined hands to relieve children from the effects of a powerful earthquake that jolted Turkey’s Aegean region last week.

The volunteers were organized over social media to support victims in the Bayrakli district of the Aegean Izmir province, the most-affected province by the 6.6 magnitude quake which claimed over 100 lives, injured hundreds others.

Establishing the Volunteer Group for Izmir Earthquake Coordination, they opened a temporary Activity Center for Children in the district.

In the center, including tent and open-air areas, children are provided with toys, books, and painting supplies donated by the volunteers.

The group, including child development experts and teachers, also holds different activities such as stone painting and drama workshops.

Speaking to Anadolu Agency on Wednesday, Melis Hasar, one of the volunteers, said they want to keep children away from the environment that occurs in the aftermath of an earthquake.

“We are not affiliated with any foundation. We have started this journey with four people, and now reached 250,” Hasar said.

The volunteers currently have four centers, aiming to raise the number to 17, she said, adding that the quake victim families are also happy with the services.

They are also working in open-air areas, taking measures against the pandemic and complying with all rules to stem the spread COVID-19, she stressed.

Hasar also called on people who want to help children to join them in Izmir.

A total of 1,621 aftershocks — 44 of them with a magnitude higher than 4 — have been recorded since Friday’s magnitude 6.6 quake rattled Izmir, Turkey’s third-largest city and home to more than 4.3 million people, according to Turkey’s Disaster and Emergency Management Authority.

* Writing by Sena Guler in Ankara.