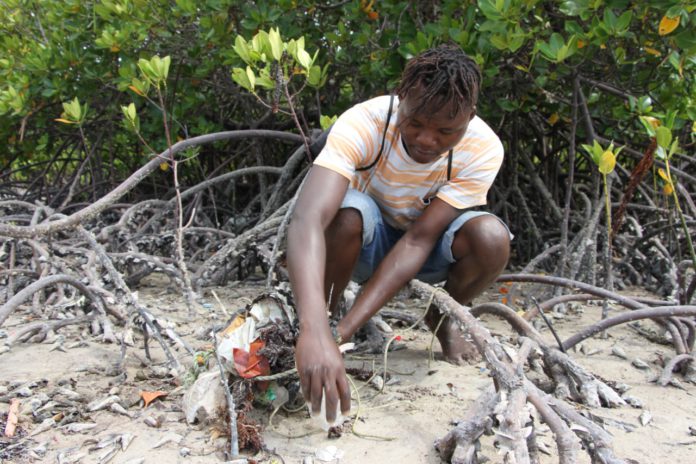 Every weekend along Mida Creek beach in the Kenyan coastal town of Watamu, a spectacular sight is witnessed as people of all ages walk the soft oceanfront sand with waves crawling the shore in a rhythmic movement repeating itself over and over.

“You see that?” asked Lela Omari, a 26-year-old student, while pointing to the gurgling waves.

“According to our community traditions, we believe that it is a pulse, it is like a heartbeat, it very steady and peaceful. The ocean has a heart that beats, that sounds ridiculous, right? But, it’s funny because our ancestors devised such things to make us take care of our oceans,” said Omari.

Omari is among dozens who drop everything each weekend to spend time cleaning an area of the ocean beach.

Locals, including children, can be seen picking up plastics along the Indian Ocean coast. The things they gather are sorted and thrown into community-maintained garbage bins to burn or recycle.

Sadeeki Shanit, a tour guide on Watamu Beach for more than eight years, said the cleaners are not paid — they do it for their love of the ocean and believe it is in their genes to be ocean caretakers.

“We are connected to the ocean, there is no doubt about that. What motivated us more as a community to take care of our ocean was after our president banned the use of single-use plastic. Before that, the task of cleaning our oceans was so huge, it was a terrible sight.”

Shanit said plastics used to come from all over the ocean and settle in the creek which has only one inlet.

“The ocean can only do much to protect itself. It is self-cleaning but the plastics would come here and dot the whole beach. Sea turtles breed in these sands. They used to be tangled in the plastic and choke or even suffocate. Those that entered inside plastics suffocated. I have seen this so many times in the past,” he said

The tour guide explained that after the plastic ban, the area “has become a proper sanctuary for turtles. They thrive in this area and we work with the ocean to ensure we protect them. That is why we always come out to clean this place. We depend on the ocean, the animals. And plants do, too.”

The most common turtles that thrive in the area are the hawksbill and green sea.

All flora and fauna in the area depend on the ocean, including many fish that breed in the many adjoining mangrove channels. This was once jeopardized by plastic waste the deprived these fish of oxygen but now, residents have taken it upon themselves to save the ocean that supports their livelihood.

The Kenya Wildlife Service (KWS) notes that the area is rich in diverse birdlife, fish, turtles, and large marine mammals known as dugongs.

With more than 100 species of birds, Mida Creek is an internationally recognized Bird Area and a UNESCO Biosphere. The most commonly seen birds include the Black Kite, Bulbul, White-Browed Coucal and Speckled Mousebird, according to the KWS.

As the world marks International Plastic Bag Free Day on July 3, the Kenyan government and people have vowed that its oceans would not be dumping grounds for plastic and are doing everything they can to keep the oceans clean.

The UN in Nairobi hailed Kenya, saying it was emerging as a leader in the fight against plastic pollution and is among the first countries in East Africa to limit single-use plastics and sign the Clean Seas initiative to rid waterways of plastic waste.

Juliette Biao, a regional director for Africa of the UN Environment Programme (UNEP), said: “Kenya has invested heavily in both policies and law enforcement to win the fight against plastic pollution. The result of this investment is today boosting Kenya’s environmental stewardship in Africa and the world.”

Most of the plastics manufactured on land end up in the oceans and waterways, according to a UN study conducted in Kenya’s second-biggest city, Mombasa.

It found “as much as 3.7 (kilograms) (8.1 pounds) plastic per capita enters the waterways each year of the total waste generated.”

Environmentalists have lauded Kenyan President Uhuru Kenyatta for banning the use of single-use plastics which was the biggest source of pollution, killing flora and fauna on Indian Ocean shores.

The UN said Kenya is turning the tide regionally when it comes to saving the oceans and fighting pollution, urging other East African countries to follow its example.

“Working closely with communities and in partnership with the private sector as well as UNEP, Kenya’s national and devolved county-level governments are establishing a plastic waste management programme — one that could be scaled and replicated across the East African community and beyond,” according to the UN report.

Across Kenya, many are investing in plastic recycling, companies have sprung up and paying communities for plastic waste which they, in turn, convert to fencing poles and plastic bricks as low-cost building materials, among other things.

Launching the New Ocean Action Agenda, Kenyatta had said last year that it was clear that the ocean economy was a smart investment that could deliver social, economic and environmental benefits to Kenyans.

“As a member of the High-Level Panel for a Sustainable Ocean Economy, I commit myself and my Government to achieving 100% sustainable ocean management of areas within our national jurisdiction, guided by Sustainable Ocean Plans, by 2025,” the Kenyan leader said, noting that his country sought to fully realize the potential of its 142,400 square-kilometer (88,500 mile) Exclusive Economic Zone along its in Indian Ocean coast.

Residents of Mida Creek said that as the world celebrated World Oceans Day 2021 last month, it should be noted that the responsibility to safeguard oceans started with local communities and respecting and adhering to laws set by governments to save water bodies.