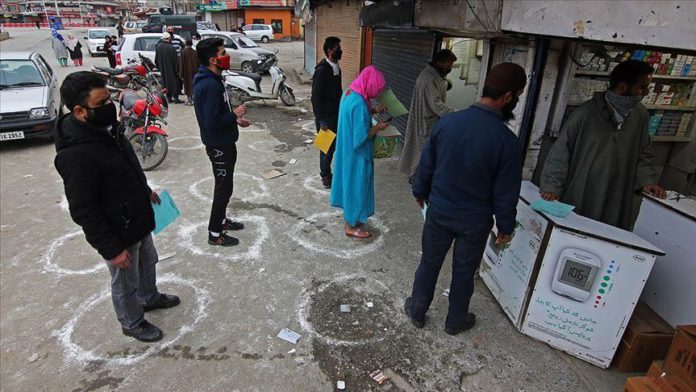 As the novel coronavirus or COVID-19 has spread rapidly across Indian-administered Jammu and Kashmir, many volunteer groups have joined to combat the pandemic which has so far killed 15 people and infected more than 1,200.

Since the first case of COVID-19 was detected in the region on March 18, hundreds of volunteers have been working tirelessly to help stem the spread of the infection.

Hakim Mohammad Ilyas, general secretary of Ehsaas International, a non-government organization that mainly works to impart education to downtrodden, was moved with the news of deaths taking place across the globe due to the pandemic and in particular the deaths of healthcare professionals.

“The best healthcare systems were crumbling and doctors were dying. It was so scary to think about ours, which is not even 30% to their standard. It was something which popped into in my mind over and over again,” Ilyas told Anadolu Agency.

On March 24, the District Commissioner of Srinagar, Shahid Iqbal Choudhary, had sought help and effective ideas from volunteer groups to combat the disease.

Ilyas came up with the idea of producing personal protective equipment (PPEs) at the local level for healthcare workers as their shortage was proving detrimental to the fight against the pandemic.

“When the idea got approved from the administration, the first and foremost challenge was to collect material and then process it. The resources were small, but the will was there,” he said.

The organization collected the required material from different places and identified around 300 skilled volunteers to manufacture the kits.

“When we produced the first few kits, they went for standard checking and were approved. To date, we have produced around 29,165 PPEs which were supplied to different hospitals in the region,” said Ilyas.

Shaheena Mukhtar, a single parent of two children from Srinagar, was skeptical about the survival of her small family when the regional government announced a strict lockdown in early March given the pandemic outbreak.

Mukhtar lost her husband in 2012 in a road accident, and since then, she has been earning a living as a tailor. But after Aug. 5 last year, when the Indian government stripped the region of its limited autonomy, her financial difficulties worsened.

“The lockdown would have cost much more, but I am thankful to the people who have brought work to our doorstep to keep us going. It proved a blessing in disguise,” Mukhtar said.

Mukhtar is among hundreds of women in the region who were employed by volunteer groups to make face masks, gloves, suits, and even PPEs.

Speaking to Anadolu Agency, Ilyas said his organization has employed 70% women for producing the PPE kits.

“We felt the need that vulnerable women in the society in this crisis who are at greater risk on many counts be encouraged to work and earn,” he said.

As the COVID-19 outbreak has restricted the movement of people, it has brought more troubles to the patients with life-threatening diseases.

Asrar Kawoosa, 29, who runs the Medical Mavericks group, has so far distributed free medicine to 200 families and arranged chemotherapy of 50 patients.

Established in 2018 by eight friends, the group relies on local donations.

“We ask for medical prescriptions from the patients and then accordingly we get the medicines and deliver them to their doorsteps,” Kawoosa told Anadolu Agency.

He said a person can go without food for a few days but not without medicines when it comes to life-threatening diseases.

Another NGO, Help Poor Voluntary Trust, is working around the clock making sure that medical emergencies are taken to hospitals in time.

Farooq Ahmad Bhat, the organization’s president, told Anadolu agency that since the pandemic broke out in the region, almost every day 10-20 critical patients are being helped out through their organization.

“We have secured the services of around a dozen ambulances to cater to patient care. We have taken around 700-800 critical patients to hospitals in the region, including expecting mothers until this time,” Bhat said. He noted there are still many people where help is yet to reach.

“This is a critical situation, and we do not know how long this pandemic will go on. But we need to do our bit for the people of this region who were already in lockdown since Aug. 5 of last year,” he said.