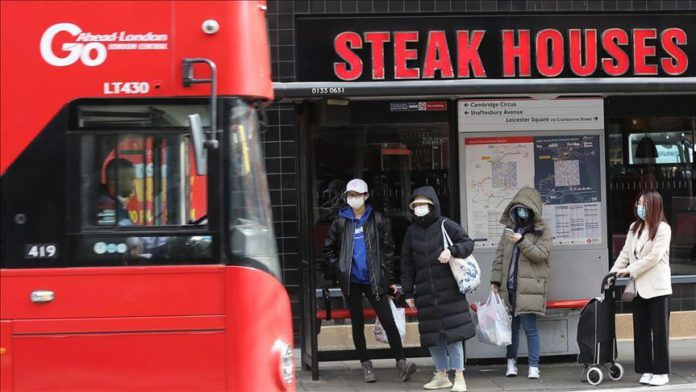 London’s transport services could face massive cuts if the government fails to come forward with a bailout, the city’s mayor said, as health authorities announced a further 428 people had died from coronavirus across the UK in the last 24 hours.

He fell ill around the same time as Prime Minister Boris Johnson, but continued to work. Sedwill is also Britain’s national security adviser.

London Mayor Sadiq Khan told a local radio station today that Transport for London (TfL) would be forced to cut transport services across the country’s capital if the government does not agree to a bailout. He gave the government until the end of the day.

“Over the last two months we’ve lost more than 90% of our fares and advertising is down and so is the congestion charge. We’ve been spending £600 million [$731 million] a month, paying for services and getting nothing back from our customers, or very little,” Khan said.

“We’ve been involved in weeks and weeks of negotiation with the government and it’s really hard getting support from them. Being blunt, today is the last day. Unless the government today gives us confirmation of the grant that we need then the consequences could be quite severe and ramifications for all of us will be huge,” he said.

“Ironically at a time when the government’s wanting us to increase services, ramp up services to get into the recovery phrase, we may be required to cut services because the government is failing to give us the grant support we desperately need,” he said.

The prime minister’s spokesman said the government had reached an “advanced stage” in talks about a London transport bailout, adding: “Our priority is on reaching an agreement which keeps critical services running for those passengers who must use public transport to get work, ensuring we keep London moving safely.”

New figures from the Office for National Statistics (ONS), the UK’s official statistics agency, estimated that 0.27% of the population of England not in care homes, hospitals or other institutional settings – some 148,000 people – had coronavirus between April 27 and May 10.

“There is currently no evidence that age affects the likelihood of being infected with COVID-19,” the ONS added.

The ONS also found in another survey that just 3% of Brits felt their lives would never return to normal post-coronavirus.

Asked how long they thought it would take for their lives to return to normal, 46% of Brits said it would take longer than six months. Only 33% responded the same way after the first week of the national lockdown.

Britain’s Office for Budget Responsibility (OBR) said the cost of the UK’s coronavirus job support scheme could reach £83 billion by the time it ends in October.

However, the Institute for Fiscal Studies (IFS), a UK think tank focusing on taxation and public policy, said today that the UK’s economic coronavirus package was only “moderate” by G7 standards. “Despite the unprecedented size of the UK’s intervention, IMF estimates suggest that the response in other G7 economies has typically been larger,” the IFS said.

“The UK package represents 5.9% of national income or £123bn, comprising £118bn of spending increases and £5bn of tax cuts. While this is huge, it looks moderate in comparison with some other countries’ interventions,” the IFS said.

Opposition leader Sir Keir Starmer slammed the government for not agreeing one a common path out of the lockdown between the UK’s four constituent nations: England, Scotland, Wales, and Northern Ireland.

“It would have been far better if the prime minister had been able to get all four nations to agree a plan instead of doing a speech on Sunday and trying to put the plan together afterwards,” Starmer said.

“There’s obviously differences in policy now as well in terms of what you can do outdoors. The sooner the four nations’ consensus can be brought back together, the better as far as I’m concerned.”

The pandemic has killed over 298,000 worldwide, with total infections of almost 4.39 million, while some 1.6 million people have recovered from the disease, according to figures compiled by the US’ Johns Hopkins University.