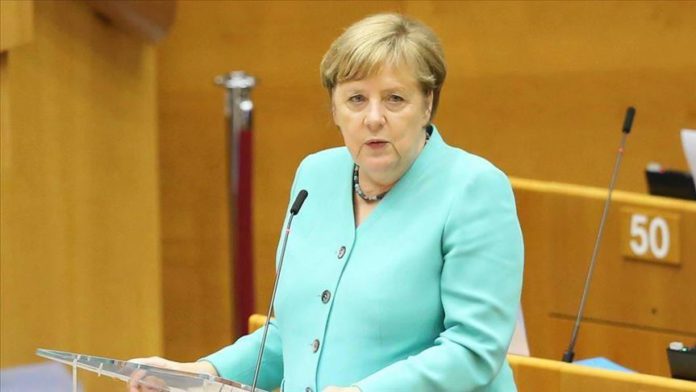 The European Union is facing the greatest challenge in its history in the coronavirus pandemic and its economic and social fallout, German Chancellor Angela Merkel said Wednesday.

“Europe can emerge from the crisis stronger than ever if we overcome our differences, strengthen cohesion and solidarity,” she told the European Parliament, introducing to MEPs the priorities of Germany’s six-month EU presidency.

As the president of the Council of the European Union, thorough Dec. 31 members of the German government will chair the meetings of EU ministers and diplomats, as well as enhance European decision-making by formal and informal events.

“I deliberately chose to come to the heart of European democracy,” Merkel said, marking her visit to Brussels, her first foreign trip since the outbreak.

Merkel said it had been particularly difficult for her to see basic fundamental rights restricted during the pandemic in order to stem the virus’ spread, as she spent the 35 first years of her life in the communist state of East Germany, where many freedoms were limited.

At the same time, she said she was convinced that the bloc will be able to maintain its freedoms.

The most imminent challenge of the Germany presidency is to find a compromise on the bloc’s budget for 2021-2027, including the coronavirus recovery fund, which has already deeply divided EU states.

Merkel also urged the European Parliament to find a compromise over the budget, referring to how EU lawmakers already drew red lines on passage of the financial framework and recovery fund.

During her visit, Merkel will also negotiate with the presidents of the three main European institutions – the European Commission, the European Council, and the European Parliament – on the budgetary compromise.

Leaders of the 27 EU states will hold a summit on the same subject next Friday.