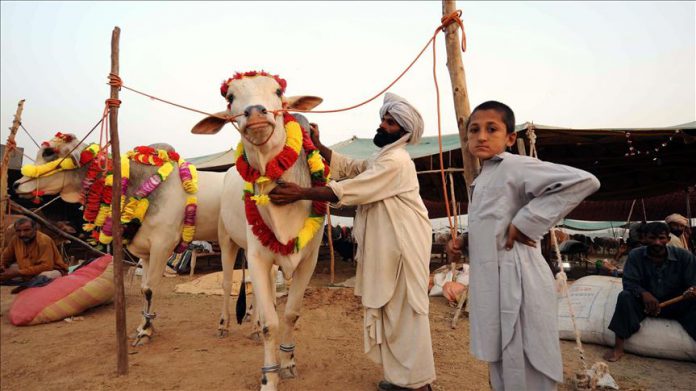 A prolonged lockdown imposed by the Pakistani government to stem the spread of the novel coronavirus poses a potential threat to the survival of hundreds of thousands of livestock in the country’s southeastern Thar Desert, said local residents and experts.

The crippling restrictions have not only stopped the traditional annual migration of the desert’s dwellers, or Tharis, to adjoining districts in search of water and fodder for the livestock — their main source of livelihood, which accounts for 80% of the local economy — but has also barred the transportation of fodder from nearby districts.

From April to June, the three driest months in the region, thousands of Tharis migrate to the adjoining districts of Mirpurkhas, Badin and Sanghar, where they not only find water and fodder for their cattle but also temporary jobs as harvesters on farmlands.

The desert, which forms a natural boundary with neighboring India, covers a region of 200,000 square kilometers (77,000 square miles), has a population of 1.5 million and is ranked by the World Food Program as the most food insecure region in the country. Its annual rainfall is 250 millimeters (10 inches).

While the Tharis have been able to struggle through previous droughts, each year makes the situation more desperate, and now many of their traditional go-to sources of water have gone dry.

“At present, overall conditions are tough due to the ongoing lockdown. But the situation concerning the livestock is harder,” Nashad Samoon, a resident of a remote village in the town of Mithi, told Anadolu Agency.

The administration, he said, was not allowing the traditional migrants to move to the irrigated districts, whereas the unavailability of transport has led to an acute shortage of fodder in addition to water scarcity.

Many of those who attempted to travel to the nearby districts were forced to return halfway by security forces, he added.

“We have been left with no other choice but the rationing of fodder for our cattle,” Samoon said.

“If this [source of income] is wiped out, that means everything is destroyed for us.”

Khatau Jani, a local journalist, endorsed Samoon’s view, arguing that a lingering drought coupled with untimely rains and a recent onslaught by locusts in the region had led to a severe shortage of water and fodder for the livestock.

“Thar is one of Pakistan’s poorest regions, where 95% of the population lives in remote villages with only a single source of income,” he said.

“No other area has been affected by this lockdown more than Thar.”

Many Tharis trudged through the hot sand and roads to get to the adjoining districts days before the lockdown was imposed, but thousands are still waiting for the restrictions to ease, according to Samoon.

“Even those who managed to move are also facing troubles. Some have been forced to return while others are still stranded at different points,” he said.

Ali Akbar Rahimoo, head of local non-governmental organization Aware, which deals with water and livestock issues, fears that the shortage of water and fodder could affect the breeding of animals in the region in the months to come.

“Shortages of fodder and water will have a cascading effect on the breeding of cattle, which will eventually hit the region’s already weak economy,” Rahimoo told Anadolu Agency.

Also, the closure of several cattle markets in Thar and nearby districts due to the lockdown for over a month had added to the economic hardship of the local communities, he said.

According to Rahimoo, Thar’s cattle account for 15% of the country’s livestock.

“Wheat harvesting is still continuing [in nearby districts]. They can still find jobs for themselves and fodder for their cattle at the farmlands if the [lockdown] restrictions for them are eased immediately,” he stressed.

“Livestock is everything for Tharis. It’s a source of income, nutrition and property. Immediate actions need to be taken to save that.” said Rahimoo.

Pakistan has been under lockdown since last month and will continue until May 9 as the country reported a total of 13,328 confirmed cases of COVID-19, including 281 deaths so far.

Putin tells Macron, Scholz he will sign decree on recognition of...