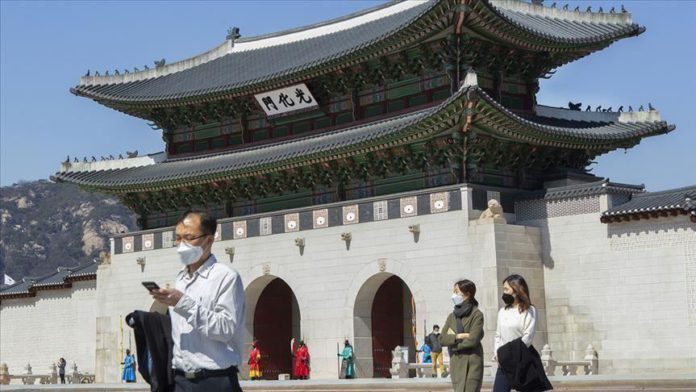 Coronavirus cases in South Korea rose by nearly 100 on Monday, local media reported, as the government downgraded the alert level in the country.

At least 98 new infections were reported today, up from 58 and 72 cases on Sunday and Saturday respectively, according to Yonhap news agency reported.

However, cases have remained below 100 over the past five days. 114 cases were reported last Wednesday.

However, the government brought down alert level to 1 from today to allow “business activities to boom.”

Cafes and restaurants are also expected to resume their businesses.

The decision to relax social distancing measures was taken in view of the “negative impact that stronger measures have had on people’s sentiment and the domestic economy.”

Earlier, Level 2 restrictions were imposed in the capital Seoul and surrounding Gyeonggi province on Aug. 16 and later expanded countrywide on Aug. 23.

Under Level 1, operations of 10 kinds of high-risk facilities, such as karaoke centers, gyms, buffets and large cram schools with more than 300 registered students are allowed.

“From now on, we will try to refrain from taking extreme measures, such as fully shutting down facilities. Rather, we will roll out more detailed preventive measures for each sector,” said a senior South Korean health official Yoon Tae-ho.

The authorities have, however, continued to ban churches from having gatherings other than regular worship services.

Churches have been hotbeds of sporadic cluster infections in the country.

Under new guidelines, churches and sports events can only fill up 30% of their seats.

Wearing protective masks at crowded places or public transportation is still mandatory in the country. Those who will not follow the COVID-19 measures will be fined $87 from 13th of the next month.

Hamas delegation in Algeria for talks on healing Palestinian rift