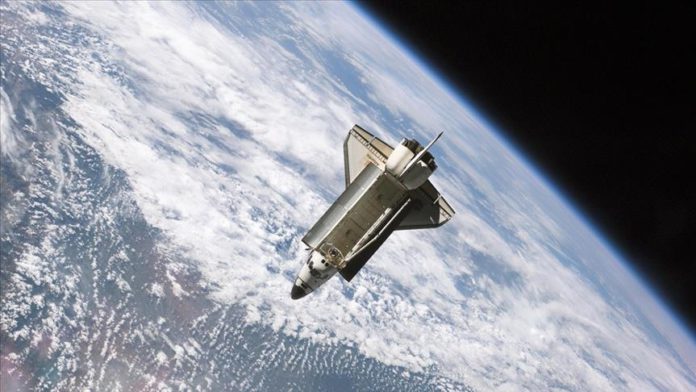 A triumphant Richard Branson and five others completed a much-hyped trip to the edge of space on Sunday morning, a momentous step in Branson’s goal to create space tourism for ordinary citizens.

“Welcome to the dawn of a new space age,” a beaming Branson told cheering fans and reporters afterwards, outside Spaceport America, a giant, space-age complex and hangar in a desolate part of New Mexico state.

The liftoff was delayed by about 90 minutes, because of high winds on Saturday night that set back the timeline of the launch.

But the weather was sunny and hot when the “mothership” — a double fuselage plane looking like two airplanes joined together at the wings — took off around 8:45 a.m. local time.

The ship is named “Eve”, after Branson’s late mother.

Branson, three Virgin Galactic co-workers and two pilots were aboard the Unity spacecraft, which hung between the two fuselages of Eve, until it was released at about 90 kilometers above the earth. From there, Unity climbed straight up into orbit, like the top of a rollercoaster.

The in-flight camera had some technical glitches, but from brief glimpses, it appeared Branson and the three others had unbuckled themselves and floated weightless for a few minutes, just as planned, before Unity started a dive back down.

After they returned to their seats and strapped back in, Branson grinned broadly as he said, “Space is a beautiful place” and congratulated his team.

Later, Unity and Eve both made flawless landings on the roughly four-kilometer landing strip from where they began.

There has been some debate over whether Branson’s flight was truly a “space” flight.

Branson’s team argued that because they would be weightless and see the curvature of the earth, they would indeed be “in space”.

Branson moved up his launch date to beat billionaire Jeff Bezos’ quest to hold the “first-tourist-in-space” title. Bezos will launch his Blue Origin space capsule on July 20 from West Texas, with himself and five others aboard.

Bezos’ team has trolled Branson by questioning the validity of the space height, saying the Bezos flight would be reaching that 100 kilometer threshold, but Bezos tweeted his best wishes to Branson on Saturday night.

Regardless, both flights, assuming Bezos’ trip is also successful, will provide a big advance in the race to bring tourists into space. Already, about 600 people have signed up for space rides on Virgin Galactic, scheduled to begin next year, including celebrities such as Lady Gaga, Tom Hanks and Justin Bieber.

But it will not be cheap; prices for either the Branson or Bezos trips, with just a few minutes of weightlessness, will be around $200,000 per person.

Still, while promoting Virgin Galactic as the preeminent mode of future space travel, Branson said, “The mission statement I wrote inside my spacesuit was to turn the dream of a space shuttle into a reality for my grandchildren.. for your grandchildren.. for everybody.”

And Branson said that anybody can donate to a charity that he is partnering with, in order for the chance to win two free tickets on an early Virgin space flight, “and, with my Willy Wonka hat on, a guided tour of Spaceport America given by yours truly, and I promise lots of chocolate in the factory.”

Portugal to head to polls amid instability, low turnout risk