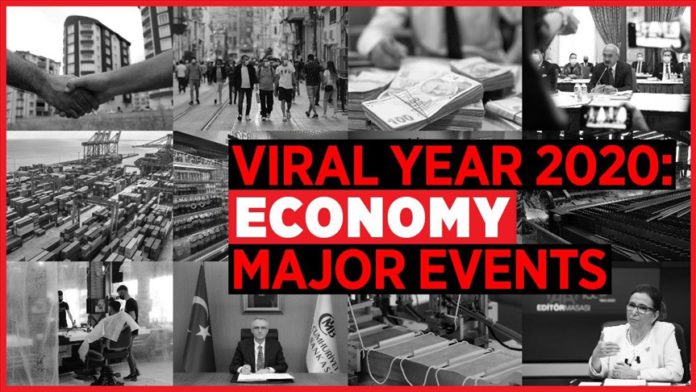 Leaving behind a year when the economy felt the fallout from the COVID-19 pandemic, this fall Turkey’s new economic administration reignited trust in the country with a shift toward policy orthodoxy and steps to simplify monetary policy.

As the coronavirus pandemic began spreading beyond China to become a global threat, its impact on the economy become a hot topic in Turkey, especially after the country confirmed its first official case of coronavirus in March.

That month the government announced a relief package to help companies cope with the economic fallout of the virus, including debt deferment, tax cuts for businesses, and help for low-income households, the retired, and the elderly.

Measures to cushion the pandemic’s impact in the first quarter of this year also shaped steps in subsequent months.

At the beginning of the second quarter the country’s economy slowed down due to shrinking export and tourism revenues and real sector shutdowns.

The economy entered a “V-shaped” recovery as of June, as commercial activities began resuming with the country’s normalization process.

The Turkish economy registered growth of 6.7% in the third quarter after a contraction of 9.9% in the second quarter as the coronavirus’ impact started to be felt in earnest. Turkey’s GDP expanded 4.4% in the first quarter.

The country’s economic management changed at the beginning of November as Treasury and Finance Minister Berat Albayrak stepped down, citing health issues, to be replaced by former Development Minister Lutfi Elvan.

Turkey also dismissed Murat Uysal as Central Bank governor and appointed in his stead former Finance Minister Naci Agbal, until then the head of the Strategy and Budget Presidency.

The new team’s pledge to introduce market-friendly and more transparent policies, shifting towards a more balanced economy to ensure free-market protection, was welcomed by foreign and domestic investors alike.

The Turkish lira rallied against other currencies and Turkish stocks gained ground following a rate hike by the Turkish Central Bank along with steps to simplify monetary policy in November.

After an initial value of 100 billion Turkish liras ($15.4 billion) when it was unveiled on March 18, the value of the government’s coronavirus Economic Stability Shield package reached 562 billion Turkish Liras ($72 billion) as of November.

On March 4, protective hygienic products such as masks, goggles, and sterile gloves were subjected to export controls in order to meet domestic demand.

On March 13, the requirement to include ethanol in gasoline was temporarily scrapped in a bid to boost disinfectant production in the country to help stem the coronavirus outbreak.

All domestic and international trade fairs in the country scheduled March 16 and onwards were postponed. Restaurants, cafes, movie theaters, wedding and event venues were also closed.

After halting its flights to China as of Feb. 5, Turkey’s flag carrier Turkish Airlines suspended nearly all international flights as of March 23 to stem the virus’ spread while continuing its domestic flights with cutbacks and cargo operations as planned.

In May, Trade Minister Ruhsar Pekcan announced that membership in e-commerce websites, participation in virtual trade delegations and virtual fairs, and organizing virtual fairs would be included in government incentives to businesses.

In June, with a downtick in virus cases, Turkey resumed domestic and international flights and cruises and reopened border gates, restaurants, and factories.

In August, Turkey’s president announced the historic discovery of 320 billion cubic meters (bcm) of natural gas reserves in the Black Sea, near the Turkish coast.

Turkey’s tourism sector will likely shrink 70% this year, the country’s culture and tourism minister said, adding that 2020 revenues are expected to be slightly over $11 billion, with over 15 million travelers.

The country generated $8.1 billion of tourism income in the first nine months of this year and welcomed more than 11 million visitors.

Despite making a flying start to 2020, Turkish exports could not offset the significant loss in March-May, and fell 9% on an annual basis to $135.6 billion in the first 10 months of this year.

After hitting a yearly low in April of 10.94%, annual inflation rose to 14.03% in November, driven by rises in food and oil prices and the effects of exchange rate fluctuations.

Turkey’s stock exchange Borsa Istanbul started the year at around 114,900 points. Borsa Istanbul broke record after record through the end of the year with the backing of strong buying of domestic investors.

The BIST 100 index topped 1,400 points in December, its highest level ever.

Earlier in the year, in July, Borsa Istanbul struck two zeros from its indices to make things simpler for investors.

On Oct. 30, the Turkiye Wealth Fund (TWF) sold a 10% share in Turkish stock exchange Borsa Istanbul to the Qatari state Investment Authority. The $200 million transaction size implies that the exchange has a total equity value of $2 billion.

After starting the year at around 5.9500, the dollar/lira exchange rate hit a record high in October at above 8.50. Following moves by the Central Bank and President Erdogan’s announcement of an ambitious slate of economic and legal reforms, in the last two months of the year the lira stabilized to around 7.70.

Over the course of the year, the Turkish Central Bank raised its benchmark policy rate a total 3,000 basis points to 15%, up from 12%.

Classified in the “very high human development” category by the UN Development Program (UNDP) for the second time in a row, with an index value of 0.820, Turkey shot up five places to rank 54th among 189 countries and territories.

Beginning the year at 13.8%, Turkey’s unemployment rate fell to 12.7% in September despite the pandemic, thanks to the government’s short-term employment allowance incentive.