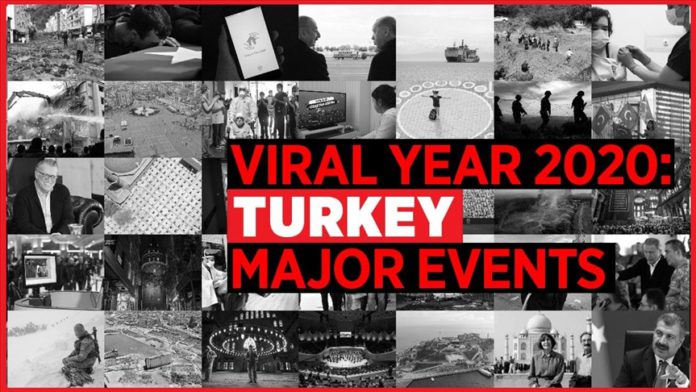 Here are the main developments of the year in Turkey month by month, and day by day:

– Hilmi Balci, one of four Anadolu Agency employees detained after raid by Egyptian police at agency’s Cairo office, arrives back in Turkey.

– Turkey deports four terrorists of French nationality back to their home country.

– A passenger plane carrying 183 people skids off the runway during landing and breaks into two at Istanbul Sabiha Gokcen International Airport, killing three people. The pilot is arrested for investigation.

– Turkey starts scanning all passengers coming from international flights with thermal cameras at airport as part of precautions against COVID-19.

– A total of 1,709 regime elements are neutralized in 17 days in operations carried out in Idlib, northern Syria by Turkish Armed Forces.

– Irregular migrants in Turkey come together at designated locations on the move to country’s western border after Ankara’s announcement that it will not stop migrants hoping to cross over to Europe.

– As part of COVID-19 precautions, Turkey bans visits abroad, and visits from abroad are cancelled unless absolutely necessary until the end of April.

– Turkey’s flagship Anadolu Agency celebrates its centennial, as it was founded on April 6, 1920 – 17 days before the Turkish Grand National Assembly convened for the first time on April 23, amid the Turkish War of Independence. Since its foundation, Anadolu Agency has worked to speedily disseminate factual news across the globe with confidence, impartiality, and professionalism.

It is seen as one of the world’s most prestigious news agencies, currently producing news in 13 languages and serving 6,000 subscribers in 93 countries with at least 3,000 employees stationed in 100 countries.

– Vice President Fuat Oktay states that Turkey started an operation to bring back 25,000 citizens from 59 countries for the Muslim holy month of Ramadan and Eid celebrations.

– Turkey’s president sends letter to head of the Armenian Patriarchate, assuring equal treatment regardless of belief and identity.

– Turkish military cargo plane carrying second batch of medical supplies departs for US to deliver aid to its NATO ally to battle the coronavirus outbreak.

– Turkey evacuates 302 of its citizens from the Netherlands, including seven babies, in fight against the virus.

– Turkey’s first drillship, the Fatih, sets sail from Istanbul for drill mission in the Black Sea.

– Turkey’s flag carrier Turkish Airlines remains the country’s most valuable brand in 2020, according to a leading London-based independent branded business valuation and strategy consultancy firm, which says its brand value rose from $1.73 billion in 2019 to $1.98 billion in 2020.

– At his inauguration, newly elected Turkish UN General Assembly President Volkan Bozkir says that as president, he will serve all UN members and represent the UN’s membership as a whole.

– Top Turkish court annuls 1934 Cabinet decree that made Istanbul’s Hagia Sophia into museum, opening way for its use as mosque.

– A presidential decree transferring the nearly 1,500-year-old architectural gem to the state Religious Affairs Directorate is published in the Official Gazette.

– In address to the nation marking July 15, Democracy and National Unity Day, President Erdogan says, “July 15 [2016] was without doubt an attempt to invade our country. The use of terrorists within our own army for this [coup] added a vile betrayal to the invasion attempt.”

– President Erdogan tells foreign countries that converting Hagia Sophia into a mosque is a matter of national sovereignty.

– Thanks to persuasion efforts by Turkish security forces, the nephew of a former YPG/PKK terrorist ringleader surrenders in Turkey’s southern Mersin province.

– Historic Friday prayers in Turkey’s Hagia Sophia Mosque mark the first acts of worship there in 86 years. Thousands of people take part in the traditional Friday prayers both inside and outside the historic mosque in Istanbul, Turkey’s largest metropolis.

– Speaking after the prayers, President Erdogan says 350,000 people attended prayers in Hagia Sophia Grand Mosque and adds, “Now this place has returned to its roots, it was a mosque and became a mosque again. Now I hope it will continue to serve all believers forever as a mosque.”

– Over last month, Turkish Coast Guard rescued 929 asylum seekers who were pushed back by the Greek Coast Guard into Turkish territorial waters in the Aegean.

– Fener Greek Patriarch Bartholomew thanks Turkish President Recep Tayyip Erdogan for the restoration of Sumela Monastery and its reopening.

– After 86 years, the first Eid prayer at Hagia Sophia Grand Mosque is done with the participation of thousands of citizens who filled the inside and outside of the mosque.

– Visiting Lebanese capital, Turkish Vice President Fuat Oktay says Turkey is ready to help rebuild buildings in wake of massive blast at the Port of Beirut. After meeting with Lebanese President Michel Aoun, Oktay tells Lebanon that it can use Turkey’s Mersin port until their port is rebuilt.

– Turkish President Erdogan receives the management of Anadolu Agency, the country’s most trusted news source, as part of its centenary celebrations.

– President Erdogan announces the discovery of the biggest natural gas reserves in the country’s history in the Black Sea, near the Turkish coast.

– Eleven people, including soldiers, are killed and many houses and shops damaged in floods triggered by heavy rain in Turkey’s Black Sea province of Giresun.

– Turkey wards off six Greek F-16 jets as they approach the region in the Eastern Mediterranean where Turkey issued a maritime Navtex alert.

– Nihat Turan, a senior Daesh/ISIS terrorist said to be in charge of its operations in the southeastern Diyarbakir province, is arrested by Turkish police. Turan was wanted by authorities and previously sentenced in absentia to over six years in jail.

– In a phone call, the Turkish and French presidents discuss the Eastern Mediterranean, bilateral ties, and relations between Ankara and the EU. Turkey’s Erdogan tells France’s Macron that ignoring the legitimate rights of Turkey and the Turkish Cypriots in the region is the reason for the tension.

– Turkish border guards nab Islom Saydalimov, who allegedly has links with al-Qaeda, in its southern Hatay province’s Altinozu district with his wife and three children.

– A series of technical talks between Turkish and Greek military delegations are planned after a phone call between President Recep Tayyip Erdogan and NATO Secretary-General Jens Stoltenberg. Turkey’s National Defense Ministry announces that Turkish and Greek military delegations reach a “common understanding on general principles” on the Eastern Mediterranean.

– Second anniversary of the brutal murder of Saudi journalist Jamal Khashoggi by a 15-person team from Saudi Arabia after he entered his country’s consulate in Istanbul. In a 101-page report prepared by the UN on the incident, Saudi Arabia is held responsible for the planned murder.

– President Erdogan slams French president’s recent remarks, saying “[Emmanuel] Macron’s statement on ‘Islam is in crisis’ in a city where Muslims are the majority goes beyond disrespect and is a clear provocation.”

– Magnitude 6.6 earthquake jolts Turkey’s Izmir province’s Seferihisar district at 2.51 p.m. local time (1151GMT) at a depth of 16.54 kilometers (around 10 miles). During the earthquake, many were trapped under debris while buildings collapsed, damaged.

– Turkish President Erdogan visits quake-hit Aegean province Izmir to inspect earthquake zone, meet local authorities. Telling that 24 million Turkish liras has been allocated to the region, Erdogan said rental support will be given to those whose houses were damaged in the earthquake, construction will begin after debris is removed, and houses will be quickly rebuilt.

– 3-year-old Ayda Gezgin pulled alive from rubble days after powerful earthquake in Aegean Izmir province, 91 hours after quake. Ayda, the 107th survivor to be rescued, became a symbol of the quake.

– President Recep Tayyip Erdogan conveys congratulatory message to US President-elect Joe Biden, saying he hopes the results benefit the “friendly and allied” people of the US.

– Despite ongoing COVID-19 pandemic, Turkey’s economy grew 6.7% year-on-year in the third quarter of 2020, according to TurkStat agency.