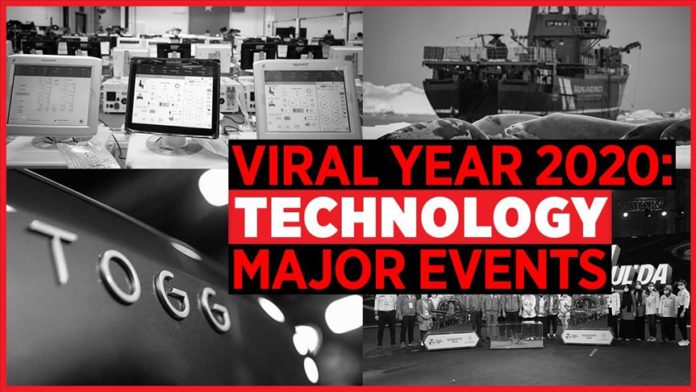 Turkey saw significant developments in the field of technology in 2020, including the manufacturing of high-tech medical devices, the first Turkish “unicorn” startup, and the launch of a new communications satellite.

By forcing people to stay at home, the novel coronavirus pandemic has triggered a digital transformation for both businesses and governments on a worldwide scale.

While Turkey was active in producing and exporting technology, laws were also passed for data protection, especially for social media giants.

The share of high-tech products in the country’s overall exports rose during the year.

Turkey also focused on scientific research in many fields, including Antarctic studies and medical trials related to the novel coronavirus.

While major countries struggled to produce medical ventilators, the Turkish firm managed to make one within only a few weeks with the backing of unmanned aerial vehicles producer Baykar, major appliances firm Arcelik, and defense giant Aselsan.

After mass production of the device, Turkey exported and donated hundreds of medical ventilators to several countries.

Turkey also stepped up its efforts to develop and produce other types of medical devices such as X-ray systems, to keep millions of dollars within its borders.

In April, Turkey launched a fellowship program for students to participate in vaccine and medicine research on the novel coronavirus.

As part of medical studies in the country, several teams have been studying medicine and vaccine projects to fight COVID-19.

The country’s 4th National Antarctic Science Expedition started in February to carry out 15 research projects on the white continent. In September, a documentary on the project was released.

Turkey on Jan. 15 ended a three-year ban on Wikipedia. Turkish authorities had blocked the online encyclopedia in 2017 due to articles and comments falsely alleging Turkey that was aligned with various terrorist groups.

After it was blocked in the country, Wikipedia’s volunteer editors changed or removed several articles including misinformation about Turkey.

In 2020, Turkey also focused on regulations for social media and technology giants. In November, the country fined Google $25.6 million for breaching the country’s competition law.

The country also imposed millions of dollars of penalties over violations of the law by social media platforms which are accessed over 1 million times every day from Turkey.

Established in 2010, Peak Games is the owner of Toon Blast and Toy Blast games, which have over 12 million mobile daily active users on average.

Peak Games was the first Turkish unicorn – meaning a startup company valued at over $1 billion.

There were also developments for Turkey’s first domestically manufactured electric car TOGG, which was introduced in December 2019.

After signing a goodwill agreement with major global battery producer Farasis in October, TOGG announced that the vehicle will have a longer battery life than its competitors.

Turkey also accelerated work in the field of outer space. Later this month the country is set to send its Turksat 5A communication satellite into orbit with the cooperation of SpaceX.

The country will also launch new satellites in the days to come.

Besides sending satellites, Turkey also plans to establish a launching facility in the country.

Work for the country’s space agency, which was formed in December 2018, continued in 2020, including software.

In September, the country’s largest technology and aviation event, Teknofest, was held, after being postponed due to the pandemic.

While it hosted hundreds of thousands of people in 2019, the event did not accept visitors in 2020 and instead streamed virtually.

Several other major events, including Eurasia Airshow, the World Tourism Forum, and the International Investment Forum, were held in the online environment by streaming via YouTube and other channels.

With the MEXT Technology Center, Turkey is able to move to the international platform and shape global policies.

Turkey also decided to establish a new executive industrialization committee, under the leadership of President Recep Tayyip Erdogan, to make the country a major player in global competition by expanding its capacity.

The committee will make decisions to improve the industry with relevant ministries.

The committee is also set to facilitate the control of public procurement in line with indigenous production priorities.