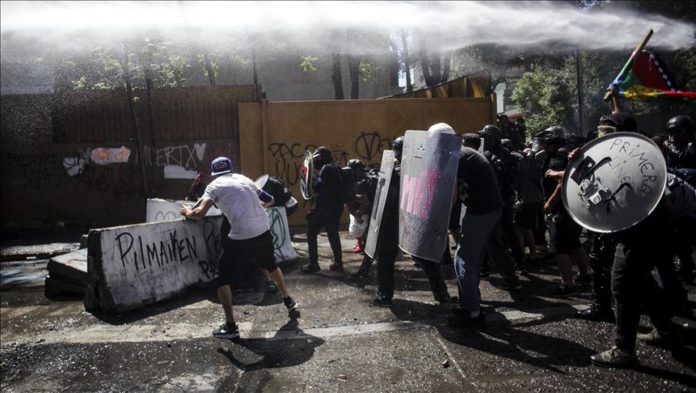 Two churches were consumed by fire as more than 25,000 Chileans gathered Sunday in Santiago’s central square to mark the first anniversary of the October 2019 uprising.

Peaceful demonstrations downtown and in various cities throughout Chile devolved by nightfall into riots and looting, causing extensive damage to public infrastructure.

At least 10 people were arrested, according to police, which reported that 18 agents were injured during Sunday’s protests.

“Indignation and sadness for the fire and destruction of the parish of La Asunción, and the attack on the church of San Francisco de Borja, both heritage buildings. First thing tomorrow morning a team from Chile’s National Monuments Council will review the damage to support their diagnosis,” Valdes wrote.

Interior Minister Victor Perez highlighted the peaceful start of the demonstrations and called on Chileans to resolve their differences at the polls.

“Those who carry out these acts of violence do not want us Chileans to solve our problems in democratic ways,” said Perez after meeting with President Sebastian Piñera and other authorities in the government palace.

The protests came a week before a referendum that will be held on Oct. 25 to draw up a new constitution, one of the central demands of protesters a year ago.

Last year’s demonstrations were sparked by the announcement of an increase in Santiago’s metro fare but then brought millions of Chileans to the streets asking for reforms and improvements to the pension, health and education systems. The unrest continued until March, when the coronavirus arrived in the South American country.

Protests and violent incidents have resurfaced in recent weeks in Chile as citizens slowly begin to leave confinement measures behind.