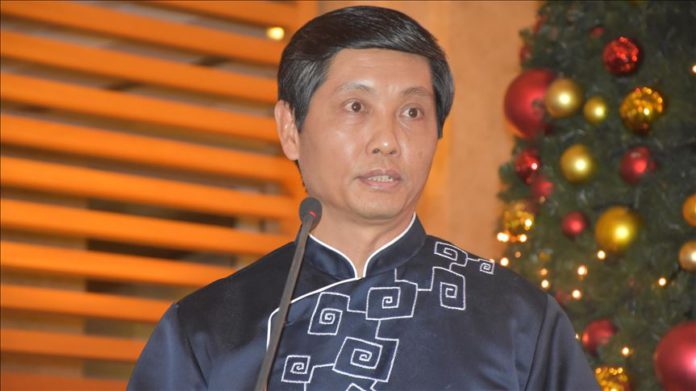 When the health care systems of most powerful countries in the world have failed to curb the spread of COVID-19, the South Asian country of Vietnam performed an outstanding work against the pandemic cutting swath through the globe.

The country is considered to have built a success story with its fight against novel coronavirus. A nation of around 95 million population, Vietnam confirmed its first COVID-19 case on Jan. 23. However, it has so far reported 328 cases with zero deaths and 307 recoveries. The country has 1,450 kilometers (900 miles) of land border with China, the ground zero of the virus, which has suffered 4,638 deaths and over 84,000 infections.

“Early awareness of the pandemic, appropriate, drastic and people-centric measures, as well as public support” are the main factors behind the success of Vietnam, said Tran Quang Tuyen, top Vietnamese envoy in Turkey.

The country’s quick measures to contain the spread of virus was another to-the-point move behind its success. When the number of COVID-19 cases saw a rapid increase in China in the last week of January, Vietnam banned entry to Chinese tourists on Jan. 28.

Despite having a long border with China, Vietnam has not been seriously affected by the large number of cases in its neighbor as it was quick to take preventive measures against coronavirus.

On March 21, authorities began imposing a 14-day quarantine for all foreign arrivals, as well as the places they visited.

The local administration meticulously traced every single person who may have been infected with the virus and quarantined entire streets as well as villages out of a fear of outbreak.

The country has “successfully mobilized the strength and the participation of the whole political system and community in making pandemic prevention a priority, preventing the risk from outside, zoning off areas, treating diseases effectively, as well as sacrificing immediate economic benefits to protect people’s health and lives.”

“Aside from some common policy actions such as contact tracing, ramping up production of medical supplies, and installing checkpoints at airports, Vietnam found its success in proactiveness, proactive prevention.”

The government was “proactive, not subjective” in its coronavirus measures and “fought the pandemic like fighting an enemy.”

Vietnam developed its own testing kits for COVID-19 as early as January and managed to improve it to provide result within an hour with a 90% accuracy, according to the Ministry of Health.

The testing kits were developed by Military Medical University and Viet A Company with funding from the Ministry of Science and Technology. They were licensed by the Ministry of Health and put into mass production in early March.

The testing kits — which use the Real-Time reverse transcription polymerase chain reaction (RT-PCR) method — have passed European Standards and have been recognized by the Emergency Use Listing procedure of the World Health Organization (WHO).

“They provide results faster and are easier to use than those used by the US Centers for Disease Control and WHO,” the ambassador said.

The Vietnam-made test kits also “offer other advantages including their specificity, stability, and adaptability with multiple types of testing equipment,” he elaborated.

The kit also received CE certification and a Certificate of Free Sale from the UK, which allows them to be sold in Europe including the UK.

“The COVID-19 test kit made by Viet A Company has been exclusively ordered by a distribution partner for distribution in the UK, the US, India, Mexico and some countries in Europe to the tune of 1 million tests a month.”

“Around 20 countries and territories were negotiating for the purchase of the test kits from Vietnam, and Iran, Finland, Malaysia, and Ukraine were among the first to receive products exported from Viet A Company.”

The Vietnamese government, preparing for the second wave, has requested the public to observe social distance more strictly. Ministers and heads of ministry-level agencies, chairpersons of the people’s committees of centrally-run cities and provinces –within their authority to focus on directing, guiding, inspecting — are promptly discovering and strictly dealing with violations regarding COVID-19 prevention and control in line with law.

Specifically, behaviors related to the non-compliance with prevention and control measures, reactions against officers in charge of epidemic prevention and control, the spread of untruthful information causing public concern and social instability, recycling of used medical masks, production of fake goods, goods hoarding to hike prices, and trade fraud, among others, will be strictly dealt with.

The health authority has been and will adjust the testing scheme to better control each flight and arriving passenger, and increase the responsibility of localities in the fight against the disease.

Those showing even a slightest symptom or any sign related to flu will be tested promptly. Health authorities will strengthen testing, living areas of workers and vulnerable people and prepare plans for field hospitals while the Steering Committee for COVID-19 Prevention and Control must pool resources, improve localities’ health care capacity and use modern technology in the effort.

“With recent experiences and strict measures, clear instruction, and guidance, we are confident to be able to tackle a second wave of infections,” Tuyen said.

Despite economic losses, the country of around $262 billion gross domestic product (GDP) has determined “to maintain economic stability and a low inflation rate to help businesses, investors, and the people.”

“The government has implemented many measures to support the economy, remove difficulties for production and business, such as restructuring bank loans, freezing debt, and reducing or exempting loan interest payments.”

The country is implementing assistance packages to support workers, including 62 trillion dong ($2.7 billion) in aid for 20 million workers.

The government is developing new services, especially using information technology for the development of digital government and economy.

As the term president of the Association of South East Asian Nations (ASEAN), Vietnam has been proactive and swift in coordinating joint response of the bloc’s member states.

“We have also engaged the partners of ASEAN in curbing the spread of the pandemic, and mitigating its socio-economic impacts,” the ambassador said.

As the ASEAN Chair, Vietnam has sought to bolster international cooperation with countries and international organizations to raise the effectiveness of the disease response.

“Vietnam’s efforts as the ASEAN chair have produced encouraging initial outcomes in disease prevention and control. Together with our friends and partners from within and outside ASEAN, Vietnam will continue its efforts to promote the best practices and valuable experience for the region and the international community towards an early defeat of the pandemic.”