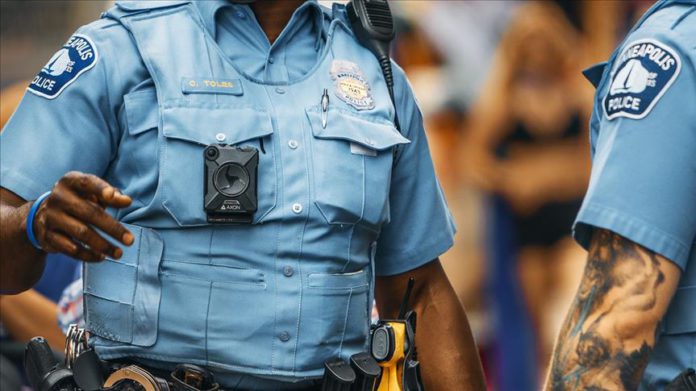 A handcuffed black man is dead and video shows a white Minneapolis, Minnesota police officer kneeling on his neck for minutes-on-end during an attempted arrest, prompting officials to announce a federal investigation Wednesday.

The man “physically resisted” officers after he exited a vehicle during the arrest, police spokesman John Elder said during a news conference.

“Officers were able to get the suspect into handcuffs, and officers noticed the male was going into medical distress,” he said.

Neither the man, nor the officers involved, have been officially identified.

But Benjamin Crump, a high-profile attorney who has represented the families of several black men and women who have been killed in incidents with police officers, said the man’s name is George Floyd.

Crump said he has been retained by the man’s family.

Officers were reportedly responding to a call of a forgery in progress when the arrest began.

Video captured by a bystander and posted on Facebook appears to show the victim pinned to the ground, pleading he cannot breathe for nearly four minutes as an officer holds his neck to the ground with his knee.

Shortly after he appears to lose consciousness, but the officer maintains his position on the man, who officials said is in his forties.

The man’s pulse is checked about three minutes after he stops gasping for air while the officer continues to press his knee on the his neck, but it is unclear from the video what the assessment was at that point. He is then loaded on to a stretcher and moved into an ambulance.

He does not appear to be conscious.

Minneapolis Police Chief Medaria Arradondo said he asked the FBI to probe the man’s death, and determine whether charges will be brought against officers involved.

The Minneapolis Police Department “will cooperate fully” with the probe, Arradondo said.

“Being black in America should not be a death sentence,” an emotional Minneapolis Mayor Jacob Frey said during a news conference. “Whatever the investigation reveals it does not change the simple truth that he should be with us this morning. I believe what I saw, and what I saw was wrong at every level.”

Melvin Carter, the mayor of neighboring St. Paul, Minnesota, lashed out after seeing what he said was “video of a Minneapolis police officer killing a defenseless, handcuffed man,” calling it “one of the most vile and heartbreaking images I’ve ever seen.”

“The officer who stood guard is just as responsible as his partner; both must be held fully accountable. This must stop now,” he said.

UK PM criticised from all sides as England reopens