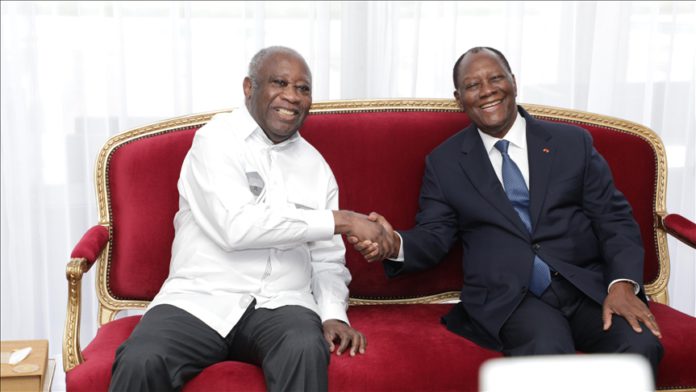 President Alassane Ouattara of the Ivory Coast and his arch political rival Laurent Gbagbo grinned as they held hands in front of dozens of cameramen in the capital Abidjan on July 27, for the first time since the country’s devastating civil war began over a decade ago.

People and experts, however, are skeptical of the two leaders’ drive for peace and reconciliation, citing various factors that point to their mutual distrust.

Gbagbo, who founded the Ivorian Popular Front in 1982, became the president of the Ivory Coast in 2000 and ruled the Western African country for a decade until the fateful elections of 2010.

He refused to accept Ouattara’s electoral victory, sparking a wave of deadly violence that claimed nearly 3,000 lives in the country, according to official figures.

Gbagbo was eventually arrested in April 2011 and extradited to The Hague in November, where he faced four charges of crimes against humanity.

In January 2019, a panel of the International Criminal Court dismissed the charges, clearing the way for his return to the Ivory Coast in June 2021, nearly 10 years after his arrest and extradition.

“What is important for Ivory Coast is peace in our country,” said Ouattara, who leads the Rally of Houphouetists for Democracy and Peace party, after his meeting with Gbagbo last month.

Everyone wants to be the victim

Simi Deroux, a political scientist and historian from Ivory Coast, believes in reconciliation, but acknowledges that it will be hard to achieve because political leaders continue to play the victim card.

He accused politicians of exploiting the poor for their political objectives.

“The main political leaders, who unfortunately have an undeniable influence on the passionate and largely illiterate population, all believe they are victims. Their supporters also stubbornly believe their leaders’ claims,” Deroux told Anadolu Agency.

He said the problem has been a long-standing one, particularly exacerbated since the 1980s, when an economic crisis was caused by a global drop in the price of raw materials.

“The scarcity of land ownership, a primary necessity for agricultural activities, has complicated the situation. This has deteriorated the atmosphere of cohabitation and complementarity between Ivorian ethnic communities, on one hand, and between Ivorians and foreigners on the other,” he said.

“Pauperization, the struggle to acquire agricultural land, and competition for jobs have led to a loosening of community ties and converted relations of complementarity and trust into competitive, or even conflictual, relations.”

Deroux said the introduction of a multiparty system in the 1990s, at the expense of a one-party model, “could not really build national consciousness” as it was done at a time of grave economic challenges.

“This has led politicians, unable to solve the resurgence of poverty, to take advantage of the instinctive irascibility of a population with little education and inclination to survive, to exploit ethnicity,” he said.

The perpetuation of certain ethnic stereotypes and unhealthy manipulation of development inequalities has also further deepened divisions within communities, he added.

Nevertheless, Deroux believes that reconciliation is possible “even if it will not be easy.”

He proposed some measures that could calm tensions, including amnesty for and release of all political and military prisoners, facilitating the return of all civilian, military, and political exiles, and addressing issues of land and illegal gold mining.

He also suggested that Gbagbo, Ouattara, and Aime Henri Konan Bedie, another former president who heads the Democratic Party, should be barred from future presidential elections.

The three men, according to Deroux, should focus their efforts on raising public awareness about the importance of peace.

“There is no genuine desire to reconcile,” Amadou Fofana, an accountant by profession, said about the July talks between Gbagbo and Ouattara.

Talking to Anadolu Agency, he described the meeting as a “game of hypocrisy,” where everyone thinks they are right and a “victim.”

Young Ivorians have yet to realize that politicians in other democratic countries are there to serve them, whereas in Africa, it is the other way round, he lamented.

“The people must realize that it is not necessary to put their lives on the line to save a politician,” Fofana said, referring to the violent years of civil strife in the Ivory Coast.

He identified tribalism and a lack of unity as additional barriers to reconciliation, saying the people are “divided into groups based on ethnic and geographical affiliations.”

The country, he added, is experiencing “a serious identity crisis.”

“Right now, people from the north, from where the current president hails, are considered foreigners and remain marginalized,” Fofana said.

“It is true that we have origins in neighboring countries, but after independence, we all have been in this country, which is ours, and we must all accept it.”

A lack of sincerity and honesty, coupled with a lack of recognition between the stakeholders, is what prevents reconciliation, according to Oum’c Barou, a Zouglou music artist.

“No one wants to admit their guilt,” he said, blaming the “ambiguous political discourse” for furthering divisions and tribalism in the Ivory Coast.

Evelyne Kouassi, an employee of a local audit firm, said political leaders have “led the population into a dead end.”

“Ivorians are in this situation because they have failed to protect their common needs and gave precedence to individual needs,” she said.

UN chief seeks support for WHO amid row with Trump