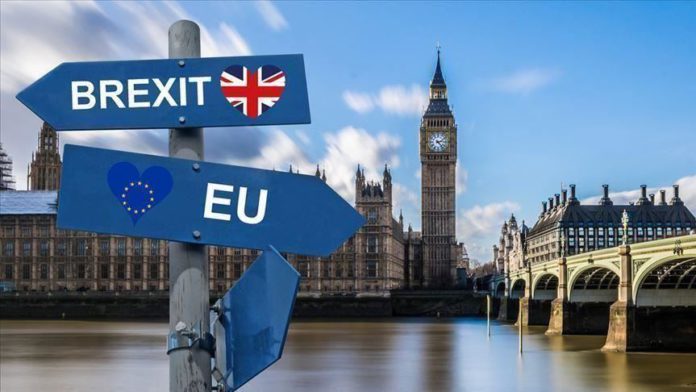 Britain’s chief Brexit negotiator David Frost said on Friday that “very little progress” has been made in trade talks with the EU, as tensions rise over the status of UK and EU nationals abroad.

“We have just completed our third negotiating round with the EU. I regret however that we made very little progress towards agreement on the most significant outstanding issues between us,” Frost said.

He made his comments after the third round of talks with the EU that took place via video conference.

“Both sides have tabled full legal texts, there are plenty of precedents, and there is clearly a good understanding between negotiators,” he said, adding that agreements on issues such as law enforcement and aviation “could be agreed without major difficulties in the time available.”

“The major obstacle to this is the EU’s insistence on including a set of novel and unbalanced proposals on the so-called ‘level playing field’ which would bind this country to EU law or standards, or determine our domestic legal regimes, in a way that is unprecedented in Free Trade Agreements and not envisaged in the Political Declaration,” he said.

“As soon as the EU recognises that we will not conclude an agreement on that basis, we will be able to make progress,” he said.

There are only two more rounds of negotiations before a high-level conference in June, which is the deadline for deciding whether there will be an extension to the transition period that is due to end at the end of the year.

The two sides are aiming to strike a free trade deal by the end of the year. The UK has repeatedly ruled out asking for an extension, despite the coronavirus pandemic.

The EU launched legal action against the UK yesterday for “failure to comply” with EU rules on freedom of movement.

The UK left the EU at the end of January, but remains bound to the bloc for the duration of a transition period that ends on December 31, 2020.

The EU handed the UK a formal notice giving it four months to “address the shortcomings,” according to Sky News. This is the first stage of proceedings, which can lead to a case in the European Court of Justice.

The European Commission, the EU’s executive arm, said UK law “limits the scope” of EU citizens living in the country. It cited examples such as limiting EU citizens ability to claim welfare benefits and “unjustified” bans on re-entry.

A spokesman for British Prime Minister Boris Johnson said: “We will look at what the EU has to say and we will respond in due course.”

Hitting back on Friday, Michael Gove, a UK minister, wrote a letter to the European Commission saying there was “a serious risk that the EU will not fulfil its obligations under the withdrawal agreement by the time the transition period ends on 31 December 2020.”

The main criticism was EU member states not putting in enough efforts to raise awareness among UK nationals in their countries about new requirements and application processes that will affect them and their right to stay in their host countries.

The British government contrasted this with its own approach, saying it had already spent £9 million helping groups supporting vulnerable EU nationals, with another £8 million to be spent in 2020-21.

There are around 1.2 million Brits in the EU, and 3.5 million EU citizens in the UK.