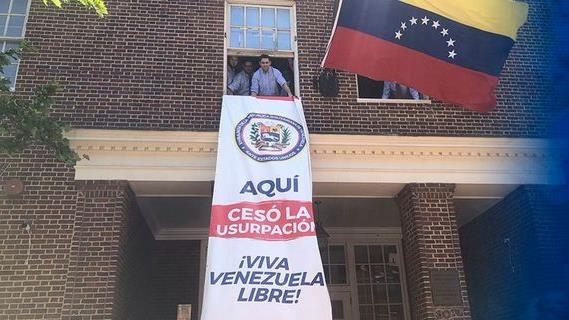 Venezuela’s foreign minister demanded Wednesday that the US return control of the South American country’s embassy headquarters in Washington as well as its New York consulate, which are being held by “a gang of international criminals” related to opposition leader Juan Guaido.

“We demand that President Joe Biden and Secretary of State Antony Blinken instruct government authorities to return the diplomatic headquarters in Washington and the consulate in New York to the Government of Venezuela,” said Felix Plasencia in a statement to the press.

According to Plasencia, the assets have been “vandalized, invaded and stolen from all Venezuelans” and “are being destroyed,” so they must be returned to the Venezuelan authorities represented by the “legitimate president, Nicolas Maduro.”

Plasencia urged Blinken to follow the example of the Bolivian government, which recently returned more than a dozen vehicles that had been in the hands of Guaido’s diplomats in La Paz since October 2020, during the government of Jeanine Anez. After Luis Arce was elected president of Bolivia last year, the Maduro government resumed relations with La Paz.

​​​​​​​The foreign minister accused several opposition leaders of destroying cultural property, the embassy library, works of art, and official residence of the diplomatic mission in Bolivia.

In January 2019, Guaido proclaimed himself acting president after the opposition-controlled National Assembly said Maduro was an usurper. The US government and some 50 other countries have since recognized Guaido as the “interim president” of Venezuela.

​​While the European Union also joined the US by officially recognizing Guaido’s presidency, it has left the door open for dialogue with Maduro.

Venezuela has also demanded the return of other assets that were “stolen” such as works of art and documents.