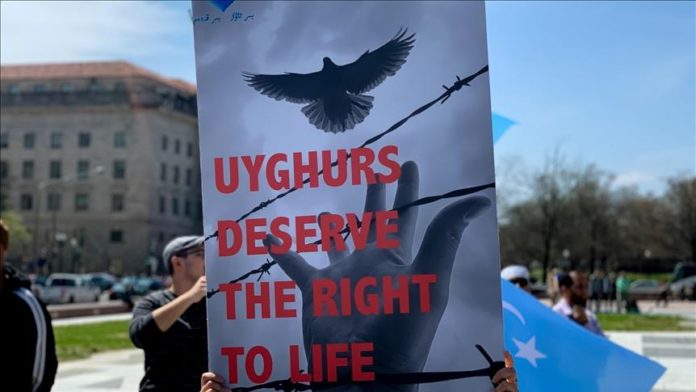 Several groups acting in unison with victims in the Xinjiang Uyghur Autonomous Region of China urged the International Criminal Court (ICC) on Tuesday to launch an investigation into alleged crimes Chinese authorities commit against Uyghurs.

The East Turkistan Government in Exile, Human Rights Watch Association of East Turkistan, the Association of Turkic World Solidarity and Cooperation as well as the Uyghur diaspora residing in Turkiye held a news conference at a hotel in the Zeytinburnu district of Istanbul.

Halit Kanak, the head of the Association of Turkic World Solidarity and Cooperation, said the group urged the ICC to probe China which will host the 2022 Olympic Winter Games in Beijing beginning later this week.

He said available evidence suggests that the number of Uyghurs deported from China’s neighbor, Tajikistan, rose sharply from 2016 to 2018 and their population residing there declined by 85%.

“The data collected through an in-depth field study in Tajikistan, Kyrgyzstan, Uzbekistan and Kazakhstan confirms the issue,” he said.

Kanak also said if an investigation is launched it would be the first of its kind in Central Asia and a fourth evidence submission process was planned in the days ahead.

Ethnic Uyghur Muslims in Xinjiang have been subjected to years of abuse because of their identity and culture.

At least 1 million Uyghurs are kept against their will in places Beijing calls “vocational training centers” but which critics call places for indoctrination, abuse and torture, according to UN data.

Several countries have accused China of committing genocide against Uyghurs. Beijing has denied any wrongdoing, dismissing the allegations as “lies and (a) political virus.”