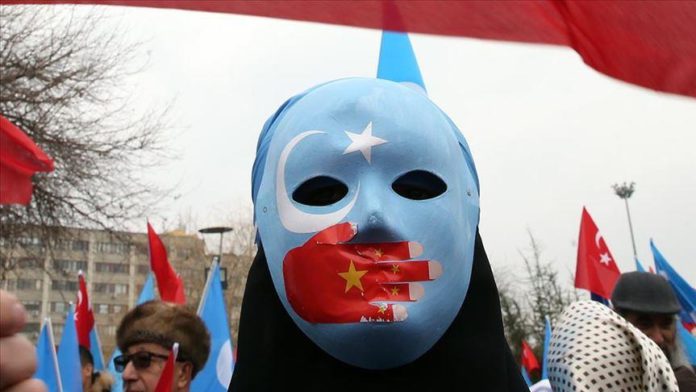 Turkey’s opposition figures joined on Thursday Uyghur families in a protest outside the Chinese Embassy in Ankara just as the Chinese foreign minister was in the country on an official visit.

The Turkic Muslim minority said in a news conference that they have not been able to contact their relatives in China’s autonomous region of Xinjiang.

China has repeatedly denied allegations that it is operating detention camps in its northwestern Xinjiang region, home to the Uyghur community, claiming instead that it is “re-educating” Uyghurs.

Many Uyghurs – around 1 million to 1.6 million, according to the World Uyghur Congress – have left China to live abroad.

Seyit Tumturk, head of the East Turkistan National Assembly, was unable to physically attend the protest due to a possible COVID-19 infection but made his statement virtually.

Uysal said: “We must call on Chinese Foreign Minister [Wang Yi], who is currently in Ankara, and Chinese representatives. Just like the Cyprus matter, Azerbaijani struggle, there must be an endeavor for [rights of] East Turkistan.”

Xinjiang is also referred to as East Turkistan.

He further called on China to respond to claims of human rights violations of Uyghurs.

Future Party’s Ozdag said: “China is a great country… It is an economic power. If it is such great country, then it must abide by its Constitution.”

Ozdag stressed people in “East Turkistan, Kyrgyz Turks, Kazakh Turks and other minorities must have same rights” as other Chinese citizens.

“They [Turkic minorities] should live freely with their own language, religion and culture. As we can see, China refrains from responding to allegations of assimilation and torture,” Ozdag added.

Calling on the Chinese foreign minister, he said China should grant activists and journalists access to the East Turkistan region.

“If these allegations are false, then refute the allegations by the people from East Turkistan, Uyghurs, Kyrgyz and Kazakh Turks in Europe, in the US. We will also apologize to you,” he said.

In a separate protest in Istanbul, Uyghurs demonstrated against the Chinese foreign minister’s visit to Turkey.

Demonstrators chanted slogans such as “35 million Muslim Turks are in sorrow” and carried banners reading “China Stop” and “Not Xinjiang, but East Turkistan.”

Many carried East Turkistan’s blue flags, denouncing China’s policy in the autonomous region and calling for a boycott of Chinese goods.

Abdulahad Abdurrahman, head of the East Turkistan Maarif and Solidarity Association, an Istanbul-based civil society group, urged the international community to protest against the “Chinese dream” of imposing its “military power, economic and political system.”