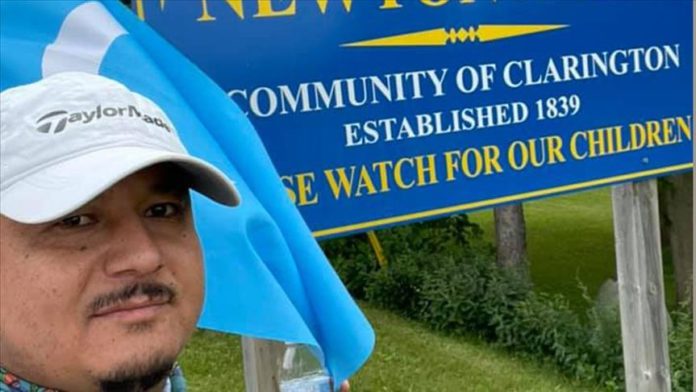 A Muslim Uyghur from Canada has walked 380 kilometers (236 miles) to draw attention to the situation of his countrymen in China’s Xinjiang Autonomous Region, also known as East Turkestan.

Bilal Malik, who set out from the city of Toronto for the March for Freedom, told Anadolu Agency that he will meet other Uyghurs in the capital Ottawa and present their demands to the office of Prime Minister Justin Trudeau.

“People that I met during my walk showed their support for the Uyghur struggle. They signed the text we prepared with our demands,” said Malik, adding he has been on the road since July 4.

“Canada should bring all stranded Uyghur refugees to Canada and open its doors to all Uyghur refugees around the world. Canada should boycott the [2022] Beijing Olympics on the grounds of genocide against the Uyghurs. The Trudeau government should recognize the [February 2021] genocide resolution adopted by the federal parliament and take steps accordingly,” Malik urged in his call to Trudeau, reiterating calls by Uyghur activists and human rights groups.

The Xinjiang region is home to around 10 million Uyghurs. The Turkic Muslim group, which makes up around 45% of Xinjiang’s population, has long accused China’s authorities of cultural, religious and economic discrimination.

Both the US and the European Union have imposed sanctions on Chinese officials over the issue, with China quickly retaliating.

Beijing has denied the claims of oppression, accusing Western capitals of using the Uyghur issue as a tool to counter China’s rising influence.