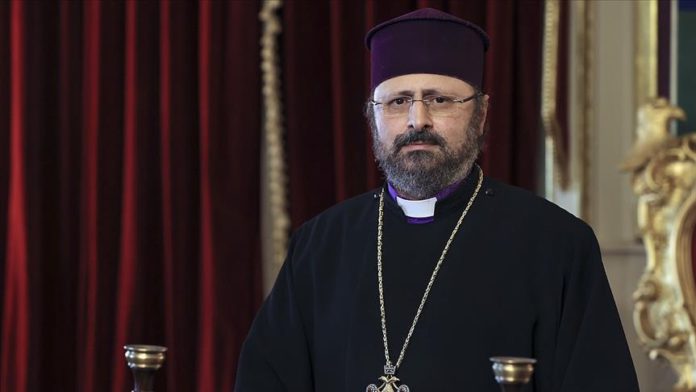 “The tension caused by the usage of the issue in parliamentary agendas for decades has not served the rapprochement of the two nations, on the contrary, it provokes hostile feelings and delays peace,” he said.

Underlining that firstly, friendship and sincerity must be reinforced between Turkish and Armenian nations, Mashalian said the evaluation of the historical incidents would be far more constructive and satisfactory under these conditions.

He added that third-party countries are expected to provide an encouraging contribution in this direction.

Mashalian told Anadolu Agency regarding the incidents of 1915, “We, just like our predecessors and late patriarchs, will continue to wish for peace, friendship and well-being between Turks and Armenians. We will encourage the rebuilding of the relations based on neighborhood and common grounds speedily.”

He mentioned that as neighboring countries, Turkey and Armenia are destined to co-exist considering their geographical locations and historical experiences.

“We prefer to be one of those who hopefully expect the revival of neighborly relations, which are unique to these lands and exist in the traditions of the two communities, between Turkey and Armenia’s authorities,” he added.

“Dear Recep Tayyip Erdogan, during his time as both Prime Minister and President, has been the only top state official in the history of the Turkish Republic to give messages on this occasion,” Mashalian said. “These messages show a spirit sharing our pain and a certain respect for the children of our nation that lost their lives in exile.”

Mashalian went on to say, “In our opinion, it would be appropriate to take these as positive steps towards rapprochement in the future. If only the joint history commission they proposed could have been established, then at least 15 years of progress would have been made.”

Mashalian said, “We still do not think it is late. The project to build a six-country basin, proposed by our Dear President for Caucasia, can bring the peace of the century to the communities in the region.”

He underlined that using more meticulous language, refraining from expressions that degrade national dignity will make it easier to establish constructive dialogues.

He noted that the tensions created by this issue that has been brought to the agenda of the parliaments for decades do not serve the rapprochement of the two nations but cause a delay in reconciliation by provoking hostile feelings.