TurkishPress
Home News US withdrawal from Syria will be ‘political decision' 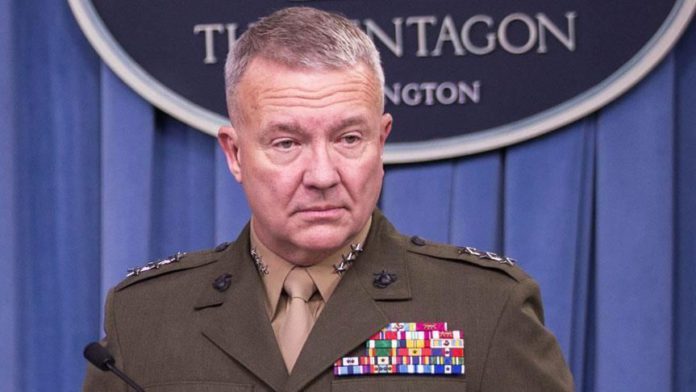 The US withdrawal from Syria will ultimately be a “political decision,” said the US Central Command top general, who warned that terrorist threats from ISIS/DAESH are not over.

“I don’t know how long we’re going to remain in eastern Syria,” Kenneth McKenzie said Wednesday during a Middle East Institute event, cited by the Defense One news site. “At some point, we’re going to come out, and that’s a political decision and we’ll be ready to execute those orders when that time comes.”

US President Donald Trump expressed eagerness to leave Syria since late 2018, however, those attempts did not completely bear fruit.

McKenzie said CENTCOM should be taken into account as part of the 2017 US National Defense Strategy, which prioritizes “great power competition” over counterterrorism with China and Russia in the Middle East.

McKenzie said he worries about China “quite a bit” in the region.

“We see China moving in, principally economically, but not completely, to establish a beachhead. The fact of the matter is China gets over 50 percent of their oil through the Strait of Hormuz. There are mass mineral and other deposits in the theater that China would like to have access to.

“They would prefer to do it under somebody else’s security auspices, but who knows what their design will be in the long term,” he said, adding it is a “significant factor” the US needs to confront.

Taking a swipe at Russia, he said although Moscow lacks the economic resources Beijing possess, “where they are, it’s pretty high intensity,” referring to Russia’s support to the Bashar al-Assad regime.

Russia’s intervention in Syria is an “opportunistic” effort to damage US ambitions in the region, McKenzie said in downplaying the threat.

“I am not one of those people that thinks the Russians are master chess players,” he said.

He also underlined that the threat from terrorist groups such as ISIS/DAESH continues.

“Even the brightest possible future is not going to be a bloodless future,” the general said.

Over 3.51B vaccine shots administered worldwide