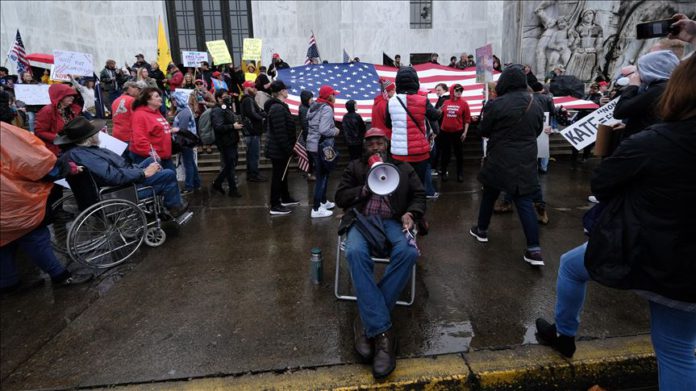 Black people in the US are not only disproportionately affected by the coronavirus pandemic, but are also arrested four times more than whites for social distancing violations, according to ProPublica, a nonprofit news outlet.

After analyzing data from the state of Ohio, where crowds of mostly white protesters have defied a stay-at-home order imposed last month without arrest, a ProPublica report said “police departments have primarily arrested black people for violating the order.”

In Ohio, a violation of the order is a misdemeanor, punishable by up to 90 days in jail and a $750 fine. Hundreds of people have already been charged across the Midwestern “Buckeye State.”

According to court records for the city of Toledo and for the counties that include Columbus and Cincinnati, three of Ohio’s most populous areas, black people were at least four times as likely to be charged with violating the stay-at-home order as whites.

Last week in Hamilton County, which is 27% black and home to Cincinnati, there were 107 charges for violating the order; 61% of the defendants are black.

Of the 29 people charged in the city of Cincinnati itself, 79% were black, according to data provided to ProPublica by the Hamilton County public defender.

In Columbus, the state’s most populous city and its capital, groups of mostly white protesters have recently shown up in front of the Statehouse and the health director’s home, with no masks and some armed.

However, despite the state’s so-called strict policies, no arrests were made, despite their flouting social distancing measures.

Ohio has registered more than 1,340 coronavirus-related deaths and over 21,000 infection cases.

The US continues to be the epicenter of the pandemic globally, with more than 1.3 million cases and nearly 80,000 deaths, according to data from Johns Hopkins University.

Trump directed killing of head of Iran's Quds force: US