TurkishPress
Home Americas US & Canada US: What's at stake in 2020: The Democratic platform 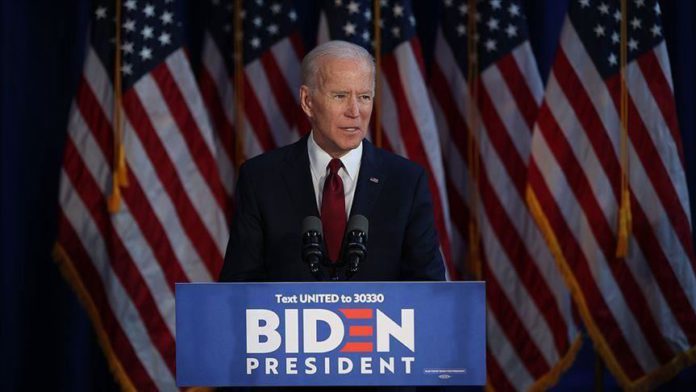 Unlike the Republicans, who ceded their re-election platform to US President Donald Trump, the Democratic Party and nominee Joe Biden have adopted a more traditional approach utilizing multiple perspectives.

“Every four years, Democrats from across the country join together to craft our party’s platform,” states the party’s platform website. Of course, the platform also points out what Democrats consider the abject flaws in Trump’s performance.

Come the day of judgement, Election Day, on Nov. 3, voters will decide which platform will guide the country for the next four years.

Here is a summary of the Democratic platform:

Biden and the Democrats accuse Trump of fumbling the response to the pandemic, saying “make no mistake,” the president “lied to the American people about the disease’s severity” and that “makes him responsible for the deaths of tens of thousands of Americans.”

That is the Democratic take on how Trump performed on the pandemic, but voters may feel differently.

Democrats promise to corral future pandemics by spearheading a global effort to prevent, detect, and respond. To combat the current pandemic, Biden says he would expand healthcare services and is, of course, pushing for a vaccine.

Biden says the “land of opportunity” has plummeted and Americans are less likely to climb the income ladder than those in Canada, Denmark, and the United Kingdom.

Democrats say they will forge “a new social and economic contract with the American people.”

As for jobs, Biden says he is ready to take decisive action to pull the economy out of recession by investing in infrastructure, clean energy and small businesses. Democrats promise to raise the federal minimum wage to $15 an hour so workers do not need to hold down multiple jobs to make ends meet. The party would prioritize the PRO Act (Protecting the Right to Organize) to restore workers’ rights, including the right to unionize.

Democrats say “we are going to at last build the health care system the American people have always deserved: one that finally provides universal health care coverage; reduces prescription drug prices, premiums, and out-of-pocket costs; reins in overall health-care expenses; and tackles the deep-seated inequities in our health care system.”

Democrats note that American prisons have the most inmates in the world behind bars per capita and the system is geared toward punishment, not rehabilitation. And, Biden says it is “unacceptable that Black parents must have ‘the talk’ with their children to try to protect them from the very police officers who are supposed to be sworn to protect and serve them.”

The Democrats say they will appoint US Supreme Court justices and federal judges who reflect the make-up of America and who will uphold the rule of law, individual civil rights and liberties and will respect past rulings such as Roe vs. Wade – the right for a woman to choose to have an abortion. They will also restore the full power of the Voting Rights Act to ensure all those who are eligible can vote. The Democrats call this “Healing the Soul of America.”

The Democrats say there is no time to waste tackling climate change – pointing to record-breaking storms, devastating wildfires and historic floods.

Trump, they say, ignores the danger and denies the science that proves climate change is real and deadly.

And the efforts Trump instigated to relax environmental laws – Republicans call it deregulation with an aim to energy independence – will be repealed and replaced to protect public lands and waterways.

As stated in the “Protecting Americans’ Civil Rights” plank, Democrats say they will fight to restore and protect Americans’ fundamental right to vote, including by aggressively pushing back against state governors, legislatures and state officials who have disenfranchised people of color, young people, low-income people, and those with disabilities.

The Democrats accuse the Trump administration on this issue, saying it has separated families, put children in cages, and banned people from coming to the US on the basis of their faith, pointing to Trump’s “Muslim ban.”

The administration has also turned away refugees and asylum seekers fleeing violence and persecution. Biden says the Democrats will put an end to it.

Given that the Democrats say early childhood education is critical in building a learning foundation for children, Biden says his administration would work with states to offer pre-kindergarten for all 3- and 4-year-olds, and would also work to make child care affordable for working class families, recognizing that many traditionally stay-at-home wife roles are now in the workforce.

The Democrats say under Trump, America’s reputation and influence are in “tatters” following the Trump administration’s shredding of international commitments, weakening of America’s alliances, and tarnishing the country’s credibility, while the introduction of tariffs has hurt American workers.

The Republicans say those measures mean it is time allies started to pay their way for US protection and tariffs have stopped other countries from taking advantage of America.

Democrats would change course and strengthen ties with allies like those in NATO and listen to intelligence concerning Russia.

As well, Democrats promise to “restore US-Palestinian diplomatic ties and critical assistance to the Palestinian people in the West Bank and Gaza, consistent with US law” while opposing “any effort to unfairly single out and delegitimize Israel.”