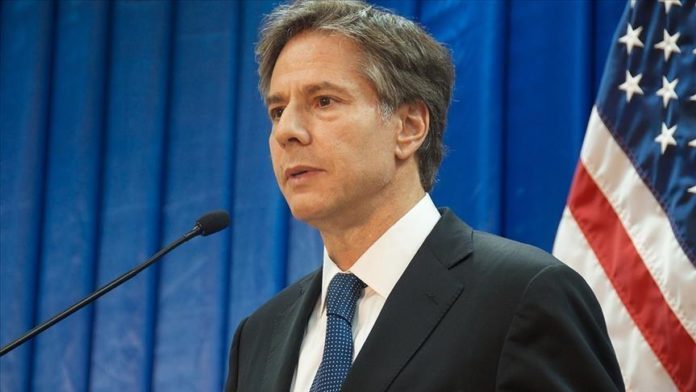 US Secretary of State Antony Blinken vowed Thursday to stand with Ukraine amid what the State Department said is “Russia’s ongoing aggression” against the eastern European country.

“Secretary Blinken emphasized the United States’ commitment to Ukraine’s sovereignty and territorial integrity in the face of Russia’s ongoing aggression in Ukraine,” spokesman Ned Price said in a statement following the meeting.

“The Secretary and his Ukrainian counterparts also discussed opportunities to deepen cooperation between Ukraine and the United States during President Volodymyr Zelensky’s planned visit,” he added.

The presidential meeting is the first since Biden assumed office in January and comes on the heels of Biden opting not to impose sanctions related to a controversial pipeline that will soon transport gas from Russia to Germany and the wider EU.

Concerns mounted that the pipeline would be used by Moscow to undercut its reliance on Ukraine as a key transit country for natural gas as Russia continues to occupy Ukraine’s Crimean Peninsula and prop up separatist rebels in eastern Ukraine.

As part of a deal to avoid sanctions, Germany agreed to appoint a special envoy to help extend the existing gas contract that it has with Russia “well beyond” its current expiration in 2024 and would take action at the national and EU levels should Russia attempt to use energy resources as a weapon against Kyiv.

Ukraine reacted angrily to the agreement, maintaining that “the main beneficiary of the crisis created by Nord Stream 2 is the Russian Federation.”