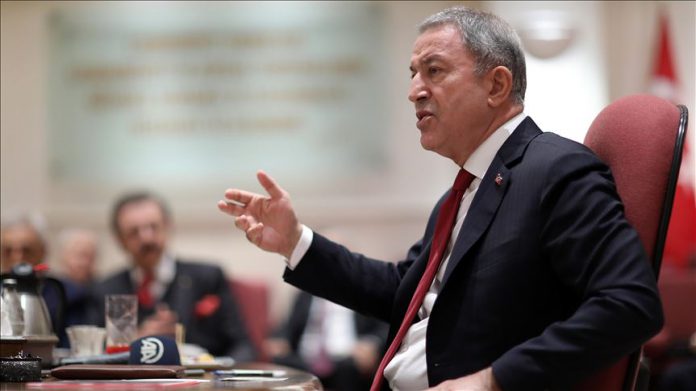 Turkey’s defense minister Wednesday slammed U.S. lawmakers’ passing two separate resolutions over the Armenian claims on the 1915 events and Turkey’s anti-terror operation in northern Syria, saying it is “against the spirit of alliance.”

“This is totally against the spirit of alliance, our works in the [NATO] alliance, our joint operations and our military exercises,” Hulusi Akar told reporters in the parliament in Ankara, Turkey’s capital.

I believe that the Americans who can think freely and will dissuade the Congress can prevent it from advancing on this wrong path,” he added.

On Tuesday, the U.S. House of Representatives voted on two separate resolutions related to Turkey that overwhelmingly received bipartisan support.

The lawmakers passed a resolution to recognize the so-called “Armenian genocide”.

Turkey objects to the presentation of the incidents as “genocide” but describes the 1915 events as a tragedy in which both sides suffered casualties.

Ankara has repeatedly proposed the creation of a joint commission of historians from Turkey and Armenia plus international experts to examine the issue.

U.S. lawmakers also passed a bill that seeks to impose sanctions on Turkey over its Operation Peace Spring in northern Syria which was launched to clear the region of terrorist elements and ensure the safe return of Syrian refugees in Turkey to their homeland.

On Oct. 22, Ankara and Moscow reached a deal under which YPG/PKK terrorists will pull back 30 kilometers south of Turkey’s border with northern Syria within 150 hours and security forces from Turkey and Russia will conduct joint patrols there. The 150-period ended on Tuesday.

Akar said military delegations of Turkey and Russia held a meeting on Wednesday, which ended with almost-complete agreement.

“The mutual and constructive” works continue between the two countries, he added.

Asked about projected joint Turkey-Russia patrols in Syria, Akar said they will start in a day or two.