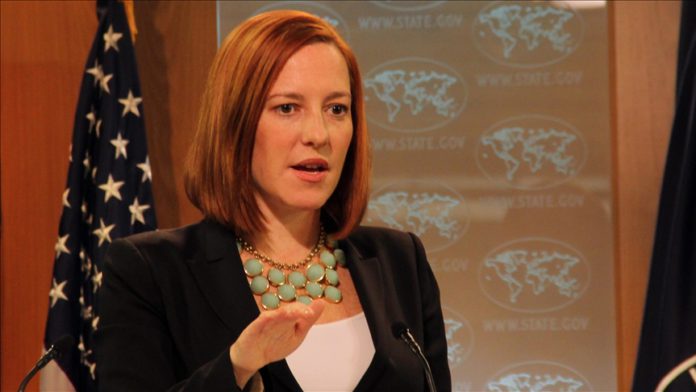 The US sharply denounced the Taliban’s nationwide offensive on Friday, saying the hardline group should take ongoing peace negotiations in Qatar as seriously as it does its military campaign.

White House spokeswoman Jen Psaki condemned the assassination of Dawa Khan Minapal, the head of Afghanistan’s government media and information center, and an attack on the acting defense minister, saying the Taliban should halt the attacks and devote its efforts to the negotiating table.

“If the Taliban claim to want international legitimacy these actions are not going to get them the legitimacy they seek. They do not have to stay on this trajectory,” Psaki said. “They could choose to devote the same energy to the peace process as they are to their military campaign. We strongly urge them to do so.”

“This is what the Afghan people so urgently need, deserve after decades of war, and is very much in Afghanistan’s neighbor’s interests to invest renewed energy into a peace process that promotes a peaceful Afghanistan and stable region,” she added.

The call comes as the UN warned that the war-torn nation is on the precipice of an all-out catastrophe.

“Ahead lies either a genuine peace negotiation or a tragically intertwined set of crises: An increasingly brutal conflict combined with an acute humanitarian situation, and multiplying human rights abuses,” special envoy Deborah Lyons told the Security Council earlier in the day.

“Today we have an opportunity, an opportunity to demonstrate the commitment of the UN Security Council and the international community that you represent to prevent Afghanistan from descending into a situation of catastrophe so serious that it would have few, if any, parallels this century,” she said.

The war between the Taliban and Afghan forces has intensified as foreign troops withdraw from the war-torn country by Sept. 11.

The Taliban are now trying to seize provincial capitals after taking smaller administrative districts in the past weeks.