TurkishPress
Home Americas US & Canada US urges Greece, Turkiye 'to work together to maintain peace' 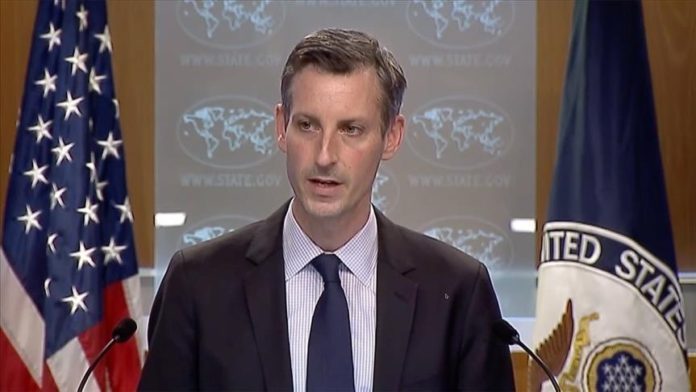 The US called on Greece and Turkiye on Tuesday “to work together to maintain peace” in the region.

“We know that Greece is an indispensable partner, and a key NATO ally to the United States. Similarly, Turkey is an important partner of the United States and important NATO ally,” he told reporters. “We want to see our partners work together to maintain peace and security in the region.”

Turkish President Recep Tayyip Erdogan on Monday wrote off Greek Premier Kyriakos Mitsotakis, saying he will no longer speak with the Greek leader, and called off a Strategic Council Meeting with Greece.

“We had agreed with (Kyriakos Mitsotakis) to not include third countries in our dispute,” Erdogan said after chairing a Cabinet meeting in the capital Ankara.

Last week, during an official US visit the Mitsotakis addressed a joint session of Congress and urged lawmakers not to sell F-16 fighter jets to Turkiye, he added.

The US will likely make up its own mind on the F-16s without needing to consult the Greek premier, Erdogan added.

US ‘deeply concerned’ by potential Turkish operation in northern Syria

On national security, Erdogan said Ankara will take steps to complete the remainder of a 30-kilometer (18-mile) safe zone along its southern border.

Asked about the remarks, Price said the US is “deeply concerned about reports and discussions of potential increased military activity in northern Syria, and in particular, its impacts on the civilian population there.”

“We condemn any escalation. We support maintenance of the current ceasefire lines. We believe it’s crucial for all sides to maintain and respect the ceasefire zones that serve to enhance stability in Syria, and to work towards a political solution to this conflict,” he said.

“We recognize Turkey’s legitimate security concerns on Turkey’s southern border, but any new offensive would further undermine regional stability and put at risk US forces in the coalition’s campaign against ISIS,” he added, referring to the Daesh/ISIS terror group.

US to list Mexican drug cartels as terrorists: Trump