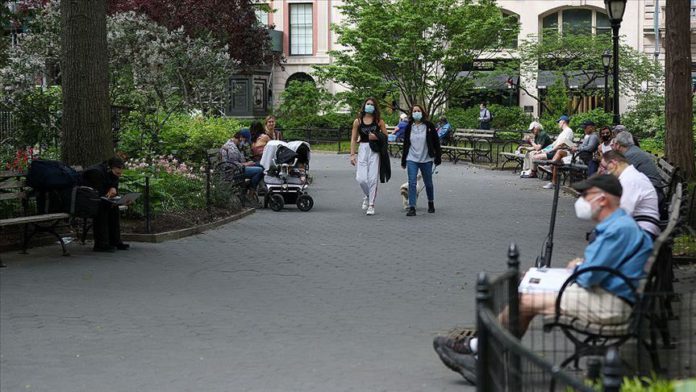 Although the coronavirus outbreak shows signs of slowing down in the US, it continues to impact both social life and the personal experience of individuals.

While the gradual reopening of the economy in the majority of states bring normalization, people continue to fight the pandemic.

Turkish citizens who live near New York and New Jersey, where the pandemic had the greatest impact, told Anadolu Agency their experiences during these hard times.

Serefcan Ozdemir, who has been living in America for 33 years, said he spent 13 days in the intensive care unit connected to a ventilator.

“I just remember myself saying, ‘don’t sleep, if you sleep, you can not see your children,’,” he said.

Ozdemir also said he appreciated that Turkish diplomatic representatives in Washington and New York got in touch with his family many times to follow their situation closely.

A 36-year-old Turkish citizen who has been working as a police officer in the New York and New Jersey area for about 15 years said he had to return home with an oxygen cylinder due to insufficient hospital capacity.

“I returned home connected to the oxygen cylinder. In tests, my lungs still look like the lungs of an 84-year-old man,” he said under anonymity condition.

The officer said he was discharged from the hospital after 10 days as there was no room for those in a worse situation.

The emergency rooms are in a “very bad” condition in the US, he said, adding that the hospital should not have used hydroxychloroquine, an anti-malaria drug, for his treatment when he tested negative for the virus.

Journalist Selcuk Acar, who lives in New York for 19 years, said he thinks he got infected in a hospital where he went for an interview.

After suffering from coughing and fever for a few days, Acar said he went to a hospital but could not go through a test.

“Since there was no COVID-19 test kit, they sent me home with a report of COVID-19 symptoms, saying ‘come back if something urgent happens’.”

He said he tested negative after a two-week fight at home but still feels the virus’s effects in his lungs.

“COVID-19 is not an ordinary disease, it is very sophisticated,” Acar stressed, noting: “It changes one’s view of life as before and after the virus.”

Dr. Yakup Akyol, a radiologist in New York, said they survived the pandemic as a family with three children at home.

But his 74-year-old father-in-law who lives in the next building lost his life after 10 days in intensive care at the hospital.

“It was a huge trauma especially for my wife,” Akyol said, and added: “She could not see his father in the hospital, but only his coffin in the cemetery.”

The US is the country hardest-hit by the pandemic with more than 1.81 million cases and over 105,100 fatalities, according to a running tally of Johns Hopkins University. In all, nearly 460,000 people have recovered from the virus.

* Beyza Binnur Donmez from Ankara contributed to the story.