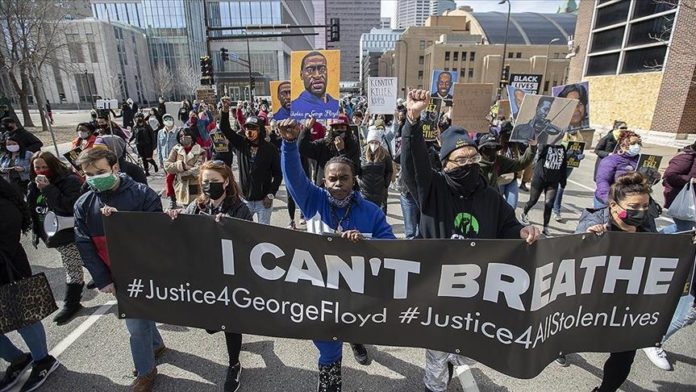 Monday’s opening statements marked the next phase of a case that shocked the world and led to world-wide demonstrations, some of them violent.

Prosecutor Jerry Blackwell calmly pointed out bystanders on the video demanding that officers, including Chauvin, “check his pulse”, as Floyd lies moaning on the ground.

“But Chauvin does not let up,” Blackwell said. “His sunglasses remain on his head, undisturbed.”

All the while, Floyd can be heard saying “I’m probably gonna die”, and “I’m through”.

Among those who tried to intercede to help Floyd were the bystanders, heard shouting on the video, “Check his pulse!” multiple times.

“A veritable bouque of humanity,” Blackwell called the bystanders.

Among them was an off-duty first responder for the Minneapolis fire department.

Blackwell said that woman will testify that as she moved closer to Floyd, Chauvin reached threateningly for a can of mace on his hip.

Also set to testify is a police dispatcher who could see what was going on through a police camera. Blackwell said she was so disturbed by what she saw that she called a police sergeant, effectively calling the police ON the police.

Blackwell also tried to preemptively blunt a defense argument that drugs in Floyd’s system contributed to his death. Blackwell said Floyd struggled for years with a drug addiction but “he did not die from a heart attack”.

And Blackwell emphasized a code of conduct for Minneapolis police officers: “In your custody is in your care”, meaning Chauvin had a duty to make sure Floyd was not harmed.

“He betrayed his badge,” said Blackwell.

“This was a murder,” Blackwell added, “you can see it for your eyes.”

He continually emphasized that there was much more to the story than what the world watched.

“The evidence is far greater than what you see on the tape,” he said.

Nelson said he’ll call as a witness the store clerk who was handed a counterfeit $20 bill by Floyd. That’s what touched off Floyd’s arrest.

The store clerk, Nelson said, would testify that Floyd, at 6′ 3″ tall and weighing 220 pounds, appeared to be “under the influence of something” and “could not control himself.”

Nelson also said he’ll call to the witness stand a bystander who told Floyd “get into the (police) car, you can’t win.”

But Nelson says Floyd did resist arrest while seated in the car, to the point that the car could be seen rocking back and forth.

“This was not an easy struggle,” said Nelson.

Nelson also said that officers were under intense pressure from what they perceived as a growing threat from the bystanders.

Outside the courthouse on Monday a handful of a demonstrators could be heard shouting, but most everyone was glued to their phones, listening to opening arguments.

The prosecution was expected to call to the stand George Floyd’s brother on Monday, as a way to humanize him.​​​​​​​

George Floyd, said Blackwell, “was somebody to a lot of bodies in the world.”

A record-high number of Americans, 48%, worry a great deal about race relations in the country, according to a poll released Friday.

The Gallup poll showed the figure dramatically increased 17% from 2020. The survey attributed the increase to the killing of Floyd.

Floyd’s death in May 2020 prompted widespread calls for justice and renewed fervor and unrest regarding police-involved killings of Black men in the US.

“I can’t breathe,” his dying words, became a rallying cry for worldwide protests.

Chauvin, who is white, is accused of killing Floyd during the fatal arrest. Disturbing bystander and police video shows Floyd pinned to the ground in handcuffs by Chauvin, his neck compressed by the officer’s knee for nearly nine minutes.

Floyd pleaded with the since-fired officer, telling him he cannot breathe, calling out to his mother and saying “everything hurts” with some of his final words before he appeared to lose consciousness. The officer continued to hold the position on Floyd’s neck.

The city of Minneapolis has since banned police from using chokeholds and neck restraints.