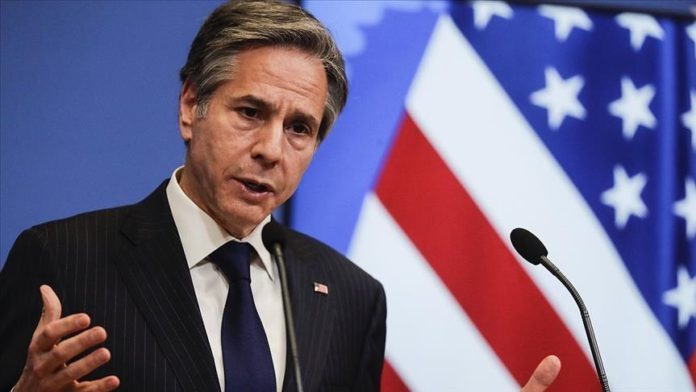 Secretary of State Antony Blinken held separate telephone calls on Friday with his German and French counterparts, discussing the situation in Ukraine amid a massive Russian troop buildup.

During his conversation with French Foreign Minister Jean-Yves Le Drian, the top diplomats “confirmed their unwavering support for Ukraine’s sovereignty and territorial integrity.”

“They discussed the need for Russia to end its dangerous and irresponsible rhetoric, its military buildup in occupied Crimea and along Ukraine’s borders, and unilateral Russian provocations along the Line of Contact in eastern Ukraine,” spokesman Ned Price said in a statement.

In a separate statement, Price said Blinken and German Foreign Minister Heiko Maas “emphasized the importance of supporting Ukraine against unilateral Russian provocations along the Line of Contact in eastern Ukraine, in occupied Crimea, and along Ukraine’s borders as well as the need for Russia to immediately cease its military buildup and inflammatory rhetoric.”

The calls come as the US has said Russia is amassing its forces on Ukraine’s eastern border at a level unseen since 2014 when it seized Ukraine’s the Crimean Peninsula and annexed it in violation of international law.

Moscow has also been supporting separatist rebels since that year in the eastern region known as the Donbas after they seized large swathes of territory from Ukrainian forces. The seven years of ensuing conflict have claimed the lives of over 13,000 people, according to UN estimates.

Russia’s ongoing force buildup has fueled concerns that it is preparing for an offensive in support of the rebels in the Luhansk and Donetsk regions, which are collectively known as Donbas. The Kremlin has denied suggestions that its troop movements are in preparation for any kind of military action.

Turkey seeks peace in Libya, Syria as soon as possible