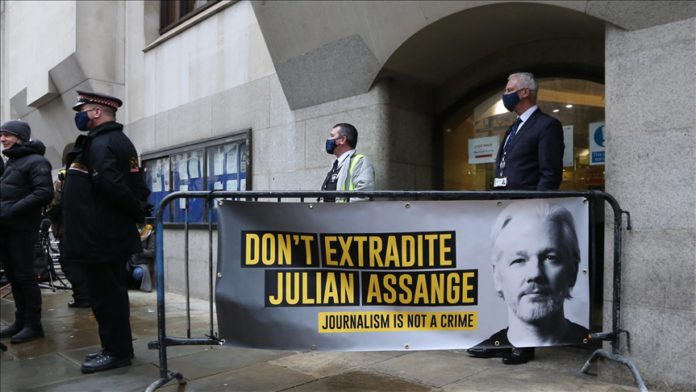 The US said Monday it will continue to seek the extradition of WikiLeaks founder Julian Assange after a UK court ruled against Washington’s request following a months-long trial.

The Central Criminal Court, otherwise known as the Old Bailey, ruled that Assange cannot be extradited due to concerns over his mental health. The State Department said it would promptly appeal the ruling before London’s High Court of Justice.

“While we are extremely disappointed in the court’s ultimate decision, we are gratified that the United States prevailed on every point of law raised,” spokesman Marc Raimondi said in a statement.

“In particular, the court rejected all of Mr. Assange’s arguments regarding political motivation, political offense, fair trial, and freedom of speech. We will continue to seek Mr. Assange’s extradition to the United States,” he added.

Should he be extradited to face charges in the US, Assange would face one count of hacking US government computers and 17 other counts of violating the Espionage Act. The charges come with a potential prison sentence of 175 years.

The US accuses Assange of espionage after WikiLeaks published hundreds of thousands of pages of secret government documents, including diplomatic cables and military records. Most notably, Wikileaks released classified video recordings of a 2007 US helicopter attack in Iraq that killed a dozen civilians, including two Reuters staffers.

Assange was dragged out of Ecuador’s Embassy in London, where he took refuge for more than seven years, in 2019. British police said he was arrested for skipping bail in 2012.

He was found guilty of breaking the terms of his bail in 2012 after failing to surrender to security services by the Westminster Magistrates’ Court and given a 50-week prison term, which he dodged by fleeing to Ecuador’s diplomatic building.