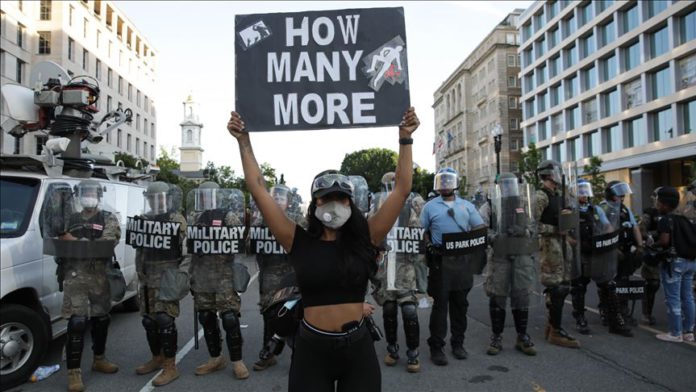 Thousands of peaceful demonstrators gathered in Washington, DC Tuesday for a fifth consecutive day to protest the death of George Floyd, an unarmed black man who died last week after being pinned down by a white police officer.

Lafayette Park across from the White House was again the focal point for the demonstrations as protestors knelt down, clapping and chanting slogans including “Black Lives Matter,” “George Floyd” and “No Justice, No Peace.”

They had come together to express their outrage over Floyd’s death, which has sparked both peaceful and violent protests nationwide as well as looting and vandalism.

The park was closed off with a tall metal fence.

Britney, a black Maryland resident who asked not to give her last name, said she wanted to be part of the “diversity” of the people that were gathering at the protests.

Peggy Lee, a DC resident from the Asian-American community, said she was “outraged” by the video that has gone viral online showing Floyd being pinned down by a white police officer in Minneapolis, Minnesota.

The nation’s capital is under a curfew that is in effect from 7 p.m. Tuesday to 6 a.m. Wednesday.

One of the officers, Derek Chauvin, pinned him to the ground and knelt on his neck for nearly nine minutes.

The protests came despite curfews in major US cities.

Pakistani not to take sides in US-Iran dispute