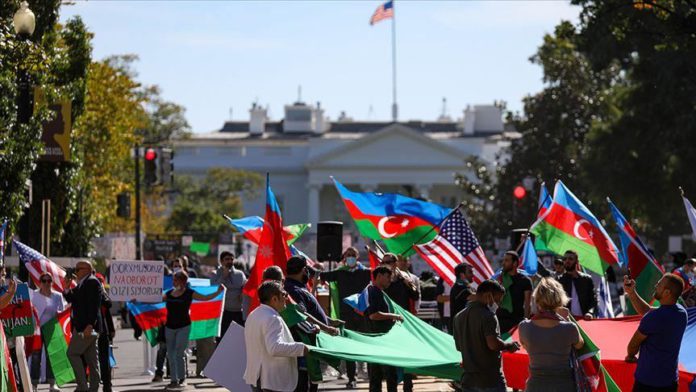 Nearly 200 people gathered outside the US Capitol building in Washington on Wednesday to protest Armenia’s attacks on Azerbaijani territories and occupation of Nagorno-Karabakh.

The protesters, carrying Azerbaijani and Turkish flags, as well as banners criticizing Armenia’s actions, shouted slogans in favor of Baku in front of the White House.

They urged the US administration to put an end to Armenia’s occupation and attacks on civilians.

Clashes began on Sept. 27 when Armenian forces targeted civilian Azerbaijani settlements and military positions in the region, leading to casualties.

Roughly 20% of Azerbaijan’s territory has remained under illegal Armenian occupation for some three decades.

The truce came after a trilateral meeting in Moscow on Friday among the foreign ministers of Russia, Azerbaijan and Armenia.

But, Armenian forces on Sunday launched a missile strike on Azerbaijan’s second-largest city Ganja — although the region is outside the frontline zone — killing 10 civilians and injuring 35.