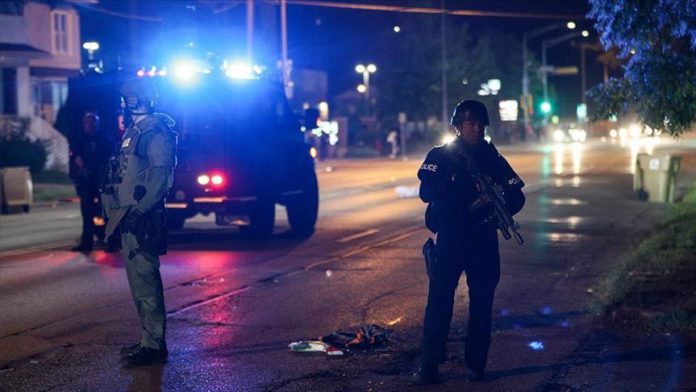 Jacob Blake, a 29-year-old Black man, has told investigators that he was in possession of a knife when he was repeatedly shot in the back by a white police officer over the weekend in Wisconsin, the state’s Justice Department said Wednesday.

In an updated statement on the shooting, which has re-ignited mass demonstrations against racial inequality in America’s criminal justice system, the Wisconsin Justice Department said Blake “admitted that he had a knife in his possession.”

Bystander footage of Blake’s shooting has made Kenosha, Wisconsin the latest flashpoint in the US’s ongoing struggle with racial injustice.

A video that has circulated widely on social media appears to show Blake walking away from police as they attempt to apprehend him with guns drawn. They opened fire after Blake opened the driver’s side door of an SUV and began to enter the vehicle with his back facing the two officers.

Blake remains in a local hospital where he is being treated for his wounds. His family and attorneys have said he is now paralyzed from the waist down and it is highly unlikely he could ever walk again.

The department is expected to submit a report within 30 days with its findings on the shooting to prosecutors, who will recommend or decline charges against the officers involved.

Kenosha has seen four nights of sustained demonstrations following Blake’s shooting that have repeatedly devolved into scenes of property destruction and violence.

On Tuesday night, at least one gunman opened fire on demonstrators, killing two and injuring an additional victim.

Police in neighboring Antioch, Illinois announced that they have taken suspect Kyle Rittenhouse, 17, into custody. The Antioch resident has been charged with first degree intentional homicide and is being held pending an extradition hearing that would send him to Wisconsin to face trial.

Rittenhouse’s arrest comes after an individual who may have shot one or all the victims appeared on cellphone footage that has widely circulated on social media.

In it, three gunshots are heard as a young white male with a long barrel rifle runs away from the scene while saying on his cellphone “I just killed somebody.” As he flees, an individual takes off his shirt and appears to attempt to use it as a makeshift tourniquet for the wounded.

A person wearing the same blue pants and green shirt is seen in a separate bystander video being chased by protesters before tripping and opening fire on protesters as they futilely attempt to take away his weapon.

He then gets up and walks away as screams of “medic” are heard in the background before he makes his way to police amid shouts of, “Hey, he just shot them.” Police, however, do not appear to take him into custody.

Wisconsin Attorney General Josh Kaul issued a statement late Wednesday sharply critical of the “violence and destruction that took place in Kenosha” on Tuesday evening, which he said “was despicable.”

“While the two people who were killed and the person who was injured by gunfire have not yet been identified, we are thinking of their destroyed futures and their friends and families that must live with this overwhelming grief,” he said.

“Kenosha residents deserve the opportunity to grieve, come together, peacefully protest, call for change, and heal. The heavily armed vigilantes, arsonists, and other opportunists who have come to Kenosha to attempt to spur chaos have interfered with that and caused drastic harm to people. If those engaging in violence and destruction of property believe they are furthering some broader goal, they are wrong. They should leave Kenosha,” he added.

Turkey criticizes use of one terror group to fight another