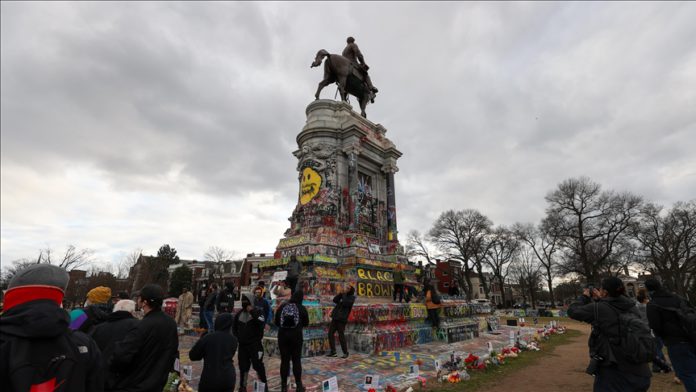 The US state of Virginia will pull down a controversial monument that honors Confederate Gen. Robert E. Lee this week, according to state officials.

Protective fencing will begin to be erected on Tuesday while the statue on Richmond’s historic Monument Avenue will come down Wednesday, according to a state press release issued on Monday.

The statue was installed in 1890 “during the historical movement that sought to undo the results of the war by other means,” the state said in a reference to the Lost Cause Movement, which attempted to rewrite history to frame the Confederacy and what it represented as an honorable endeavor.

“Virginia’s largest monument to the Confederate insurrection will come down this week,” said Virginia Gov. Ralph Northam. “This is an important step in showing who we are and what we value as a Commonwealth.”

Monuments honoring Confederate figures, including the one of Lee in Richmond, have been a flashpoint of nationwide protests that erupted following the brutal murder of George Floyd at the hands of a Minneapolis police officer in May 2020. Floyd’s death renewed protests against police brutality and racial inequities in how America polices its streets.

The confederacy that Lee led on the battlefield fought a futile war of secession from the US in hopes of retaining the legal right to own Black people as slaves.

The statue depicts Lee sitting augustly atop a horse. It has been repeatedly graffitied, and its once marble white base is now a multi-colored ensemble of political writings in support of the Black Lives Matter movement and other groups.

While the bronze statue of Lee will be removed, the base will remain. Its fate remains unclear.

Northam announced plans to remove the statue in June 2020 but had been delayed by two lawsuits seeking to prevent the action. But Virginia’s top court ruled last week that it could come down, opening the door for this week’s removal.