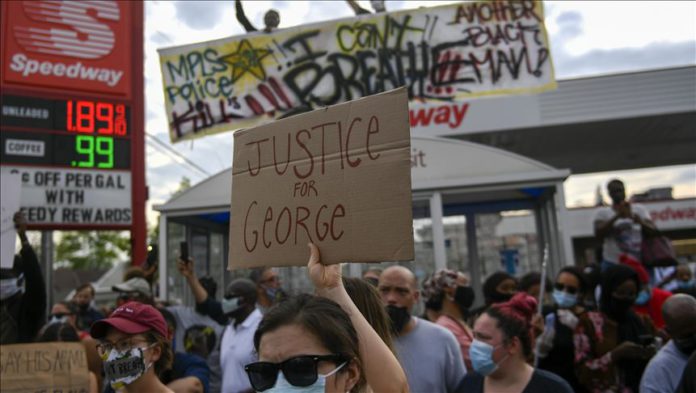 The sister of George Floyd, a black man who died as a result of brutal police response in US state of Minnesota, demanded murder charges Wednesday for police officers involved in his death.

“I would like for those officers to be charged with murder because that’s exactly what they did. They murdered my brother; he was crying for help,” Bridgett Floyd told NBC News.

The 46-year-old man died Monday after a Minneapolis police officer kneeled on his neck, despite his repeated pleas that he couldn’t breathe, which sparked mass protests and outcry against police brutality.

Mayor Jacob Frey announced Tuesday that four officers at the scene were fired after Floyd was killed during the arrest.

“This is the right call,” Frey said on Twitter.

He appeared to be in handcuffs in a video footage posted on Facebook.

Bridgett Floyd voiced concern that her own children could face police brutality when they grow up.

“You never know what could happen when they walk out the door. They’re small kids right now, but one day they’re going to be adults,” she said.

Mass protests turned into riots Tuesday after demonstrators surrounded the Minneapolis Police Department 3rd precinct. Windows of the building and police vehicles were smashed and vandalized with spray paint.

“It’s real ugly,” said one protester, according to CBS News. “The police have to understand that this is the climate they have created.”

A number of politicians and celebrities condemned Floyd’s death on Twitter, calling it “racism and police brutality.”

US restarts peace talks with Afghan Taliban in Qatar