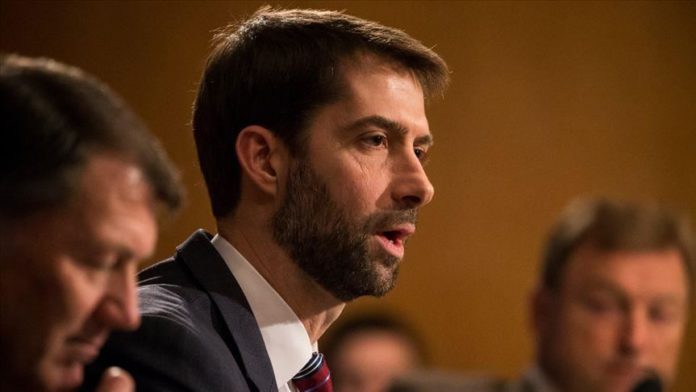 US Republican Senator Tom Cotton from Arkansas on Monday urged the use of military force against protestors who took the streets across the US after the death of George Floyd.

“Anarchy, rioting, and looting needs to end tonight,” Cotton said on Twitter. “If local law enforcement is overwhelmed and needs backup, let’s see how tough these Antifa terrorists are when they’re facing off with the 101st Airborne Division.”

Antifa, short for “antifascist,” is a far-left anti-fascist political activist movement that became popular in the US following the white supremacist Unite the Right rally in Charlottesville, Virginia in August 2017.

It is composed of groups, networks and individuals who believe in aggressive opposition to far right-wing movements.

“We need to have zero tolerance for this destruction,” Cotton added.

US President Donald Trump retweeted his post and said: “100% Correct. Thank you Tom!”

In a separate tweet, he also called the ongoing protests a “domestic terrorism”.

Lindsey Graham, another Republican senator, urged a similar action on Saturday, saying “the lawlessness on the streets is not the answer” and he “fully supports the use of federal forces, if necessary, to restore order.”

Despite curfews in major US cities, demonstrators took to the streets for the sixth day of protests Sunday.