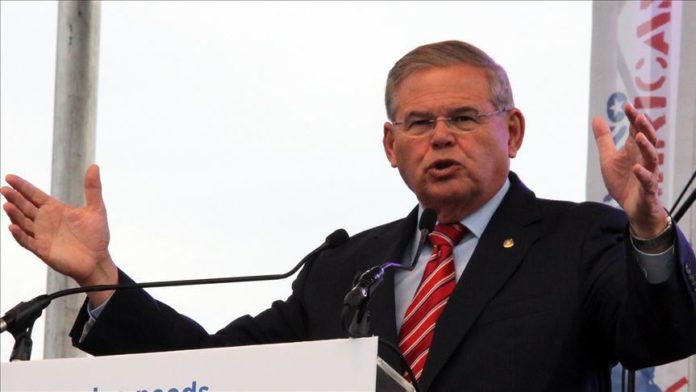 Controversial US senator from the state of New Jersey known for his anti-Turkey initiatives, Robert Menendez, has called for sanctions against Turkey because of its “increasing aggression” against Greece and Greek Cypriots.

“US ties with Greece, Cyprus and Israel are vital for stability in the eastern Mediterranean,” Menendez said in a letter to US Secretary of State Mike Pompeo on Monday. “However, in recent months [Turkish] President [Recep Tayyip] Erdogan has been threatening regional stability and US policy interests by increasing aggression against our Greek and Cypriot partners.”

Last November, Ankara and Libya’s UN-recognized Government of National Accord (GNA) signed a pact that drew the exclusive maritime zones of the two countries in the eastern Mediterranean Sea.

The following month, Greece and Greek Cyprus announced the pact for drilling activities was illegal.

Menendez, a member of the Armenian Caucus, among others, has long attacked Turkey’s interests on all platforms and is trying to disrupt a decades-long NATO alliance between the US and Turkey.

Erdogan last year called the senator an “enemy of Turkey” whose actions pose a “thoughtless threat” to Turkish-American relations.

The Democratic senator’s career is stained with scandals, according to American journalist and analyst Dick Polman.

Menendez’s name is “synonymous with ethical lapses,” Polman said in one of his articles published in the Atlantic Council in 2018.

“It’s difficult to pinpoint when Bob Menendez’s name first became synonymous with ethical lapses. Perhaps it was in 2006, when federal prosecutors suspected that the New Jersey senator had steered federal funds to a nonprofit group that was paying him rent,” he wrote.

“Or perhaps it was in 2014, when the FBI suspected that he’d intervened on behalf of two accused Ecuadorian criminals in exchange for campaign donations. Or perhaps it was in 2017, when he stood accused in federal court of helping Salomon Melgen, an affluent eye doctor, in exchange for gifts that were valued at nearly $1 million,” Polman continued.

There were even rumors on the eve of his 2012 reelection that he partied with underage prostitutes in the Dominican Republic, Polman said, as he grilled Menendez’s compromised legacy.

“The prosecutors had contended that Menendez “sold his soul for a lifestyle he couldn’t afford”, but the jury couldn’t agree on whether his behavior—taking free flights, free vacations, and big donations, in exchange for helping to promote Melgen’s personal and business interests (including the settlement of an $8.9 million Medicare dispute)—was criminally corrupt or politics as usual.”

Polman said federal prosecutors failed to prove a direct bribery-for-favors connection because the “bar for proving such a connection had been raised by the Republican-led U.S. Supreme Court.” It was ironic that Menendez, the scandal-tainted Democrat, would ultimately benefit, Polman said.

According to data available at OpenSecrets website that tracks campaign donations to US politicians, NorPAC stands out as the dominant force behind Menendez’s election to office.

NorPAC describes itself as a “non-partisan political action committee whose primary purpose is to support candidates and sitting members of the U.S. Senate and House of Representatives who demonstrate a genuine commitment to the strength, security, and survival of Israel.”

Relations between Turkey and Israel have been minimal and sour for almost a decade because of Turkey’s strong support for Palestinian rights and statehood. Turkey opposes Israeli expansion plans in the region and its designs for illegal annexations in the West Bank.

Besides financial support from Armenian and Greek diasporas in the US, Menendez receives considerable campaign donations from members of the Fetullah Terrorist Organization (FETO), which attempted a military coup against the democratically elected government in Ankara on July 15, 2016.

Loyalists of FETO leader Fetullah Gulen within the Turkish security forces killed 251 Turks, mostly civilians, in less than 12 hours before a heroic resistance from the nation finally suppressed the coup bid.

India to bring back citizens stranded in Turkey